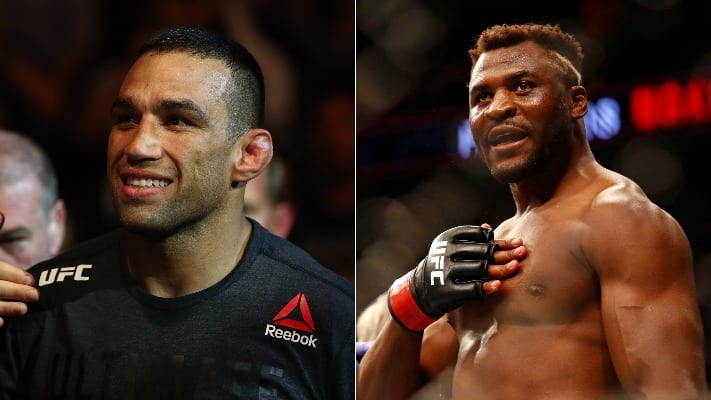 Francis Ngannou strikes fear into the hearts of many within the UFC’s heavyweight division. However, former champion Fabricio Werdum believes he’d finish “The Predator” if they met inside the Octagon.

Speaking to Sherdog recently, Werdum revealed that he has visualized finishing the knockout artist, as he has done before several of his UFC victories. He pointed out he did the same thing before defeating Cain Velasquez. (via BJPenn.com)

“The big guy, Francis Ngannou. He is a huge guy, a very strong guy. But, I visualize the fight with him and I saw when I finish him. I do this a lot, I visualize all my fights,” Werdum said.

“When I fought Cain Velasquez, remember when I won the belt? I visualized everything. I would go to Mexico, stay there for two months. And become very focused. I like the fight against Francis Ngannou. A big challenge for me, I know he is strong, but I believe I finish him on the ground.”

A potential fight between Werdum and Ngannou will have to wait. The Brazilian is serving a United States Anti-Doping Agency (USADA) suspension that is up in May of 2020. As for Ngannou, he is on a three-fight win streak, all victories coming by way of knockout. Those victories came over the likes of Curtis Blaydes, Cain Velasquez, and Junior dos Santos.

“The Predator” does not have a fight lined up as of this writing, but it’s possible he gets the winner of Daniel Cormier vs. Stipe Miocic at UFC 241.

What do you think about Werdum visualizing a finish over Ngannou?