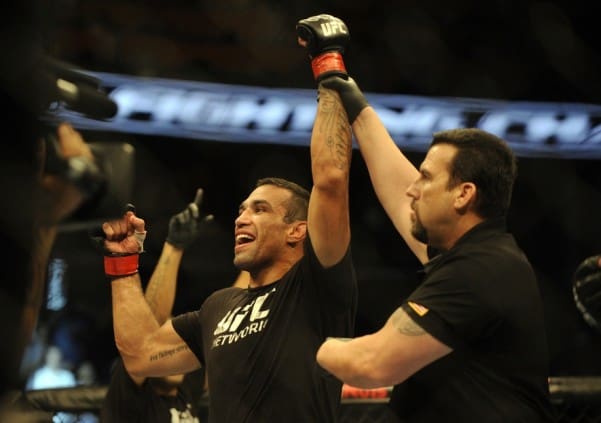 After almost 20 months out of the cage due to injury, dominant UFC heavyweight champion Cain Velasquez returned to let out his frustrations against interim champion Fabricio Werdum in the main event of last night’s (Sat., June 13, 2015) UFC 188 from the Mexico City Arena in Mexico City, Mexico.

Velasquez felt that Werdum had insulted his cherished Mexican heritage during the buildup to the fight, calling him not a ‘true Mexican’ because he was born in America. The champ took offense to this, and it, along with  Mexico City’s altitude, may have affected his performance.

The awaited heavyweight title bout began with the fighters not touching gloves. Velasquez came out wit pressure a Werdum swung wild, and ‘Vai Cavalo’ was dropped. He got back up and Velasquez came forward with shots and knees. The fighters clinched on the fence with the champ in control landing more knees in a smothering affair. Velasquez was cut over the left eye, however. He got an easy takedown, going back to his feet when Werdum beckoned him into his guard. Velasquez clinched and snapped his jab, but ate on from Werdum. The champ unleashed a combo, following with overhand rights and dirty boxing.

All of the sudden Werdum took Velasquez down, landing some big knees when he got back up. Werdum scored a big inside leg kick but Velasquez continued landing more combos and kicks. Werdum fought back well, scoring combos until Velasquez clinched. Velasquez landed two hard uppercuts and ate a hard right, scoring a brief takedown. ‘Vai Cavalo’ got up to land some hard shots on a bloodied champion, scoring another good inside leg kick as the bell sounded on the back-and-forth first round.

In the second, Velasquez came out with some low kicks. Werdum snapped his jab and straight punches, but Velasquez pushed forward with combos and more leg kicks. Werdum worked another good combo as they traded kicks, and Velasquez scored more combos. Werdum blasted a hard body kick and a knee, nailing Velasquez with two big right hands He wobbled the champ with another and clinched, only to eat more low kicks.

It was a war as Velasquez landed more punches that Werdum countered with straights and an uppercut. He landed a big knee and several punches as Velasquez appeared winded. Another inside leg kick and a combo followed, finding their mark with alarming accuracy to wobble Velasquez. A huge knee and uppercut rocked the champ as Werdum had the champ wobbled and almost finished as the bell sounded on a crazy second round.

The third round saw Velasquez go for and get a takedown as his corner instructed. Werdum gestured to his guard and got back up to land a sharp jab, but Velasquez scored a big head kick. Werdum responded with a guillotine attempt, and went for more knees when it didn’t materialize. Velasquez shot for a takedown, but Werdum locked on a super-tight guillotine that forced the champ to tap.