With UFC fighter Aleksei Oleinik going on a ridiculous streak of submitting opponents with an ezekiel choke, it’s become a popular technique again. Thanks to Oleinik more people than ever are wanting to add the Ezekiel choke to their Jiu Jitsu games.

The ezekiel choke is a powerful choke that can put your opponent to sleep in less than a second. It is usually considered a Gi move, but can be done No-Gi as we saw Oleinik do multiple times.

Let’s take a moment and tell you everything about the ezekiel choke, or Estrangulamento de Ezequiel as it’s known in Portugese. We’ll detail everything from how it was invented, how it works, and breakdown various ezekiel choke techniques.

When was the ezekiel choke invented?

Just like most of the techniques in Jiu Jitsu, the ezekiel choke was first invented in Judo. It’s original name is the sode-guruma jime.

The name ezekiel choke wasn’t used by Jiu Jitsu practitioners until 1988. A famous Brazilian Judoka named Ezequiel Paraguassú wanted to tighten up his ground game before the Seoul Olympics.

So he began his preparation for the Olympics at Carlson Gracie’s Jiu Jitsu Academy. He would routinely use the sode-guruma jime in training.

How does the ezekiel choke work?

There’s different types of Ezekiel chokes either involving the Gi and No-Gi. The feeling of each type is sort of similar to putting your opponent’s neck in a vice.

This choke gets tighter and tighter compressing the opponent’s neck until they tap or go to sleep.

It’s supposed to be more of a blood choke, but they can also be partially air chokes. Especially when you lock on an ezekiel choke from the front of your opponent.

Probably the most common place to set up an ezekiel choke is from the mount. When you’re on top from mount and your opponent is hugging you, they’re basically giving your set up. Either way if they don’t do this, the steps for the mounted ezekiel choke are the same.

Slide one of your hands behind the opponent’s neck. While you’re doing this keep your head on the mat next to theirs. Make sure to also have your free hand based on the mat to defend if the opponent tries to reverse you.

Next bring your free hand next to the hand under their neck to grab the sleeve of your free hand. The proper grip you need to use for the choke to work is inside the sleeve.

Once you  grab the sleeve, turn your arm and slide it under the opponent’s chin across their neck. To lock in the pressure scissor your arms together to close the space and force them to tap.

You will also need to pull your arm across their neck using them sleeve grip, while taking a slight angle.

To do an ezekiel choke from closed guard, you’ll first need to take a collar grip. Get it deep, but not too deep like you’re going for an x choke.

Next step is you sit up and reach around your opponent’s neck and grab your opposite sleeve. For this technique, you grab your sleeve on the outside and pull it outward.

When you come back down, you finish the choke by bringing your elbow inward to close space around their neck. It creates a lot of pressure and they only have moments to tap.

Ezekiel choke from inside guard

The ezekiel choke is one of the very few submissions you can pull off when you’re inside an opponent’s guard. If your opponent has a tough guard, you can do this either to attempt to submit them or open their guard.

When you’re in guard, you set it up by letting the opponent get underhooks. You could also leap forward and put to get your arms next to their head.

Once you do this, the steps are basically the same as a mounted ezekiel choke. Hook an arm behind their head, grab your sleeve, and sit up to lock in the choke.

Ezekiel from back mount #1

The first ezekiel choke we’ll detail is really simple to pull off. It is basically the same movements as an rear-naked choke, but it involves having a sleeve grip.

First step is to get your arm under their chin and cup the shoulder blade with your hand. In No-Gi, this is how you would set up an RNC, but in Gi you have the option of doing an ezekiel.

Grab the sleeve of your free hand and slide your hand behind their neck to finish. It also doesn’t matter if the opponent is blocking their neck with their hand. The choke is strong and will work just the same if they’re protecting their neck.

Ezekiel from back mount #2

From the seat belt grip, slide your bottom arm under the opponent’s arm further. Then connect your hands with a Gable grip, take your hook out, and pull them to their side.

Now you scoot up a little further to put more pressure on their neck and set up your sleeve grip. Either a 3 or 4 finger grip will do from here, so do whichever you prefer.

After you take your grip, slide your hand behind their neck. For the last step bring your knee towards their head, sit down and finish the choke.

This No-Gi ezekiel choke technique works the same way whether you have mount or in top half guard.

The first step is to swim your arm behind the opponent’s head and get in deep. Do it with force so that you make them start turning their head.

Next step is you put your head next to your opponent’s. You’re going to push on the side of their head with yours to move their head. This is to make space for your top arm.

To get your top arm in, raise your head up, slide it in, and clamp your arms together. Bring your head back down and start sinking in the pressure.

We couldn’t do an article on ezekiel chokes and not cover Aleksei Oleinik’s ezekiel chokes. It is highly unlikely you’ll get this choke when you’re mounted, but his set up from standing is solid.

When he fought Anthony Hamilton, Oleinik let Hamilton get double underhooks from standing. This opened the opportunity for him to get the ezekiel choke grip around his neck.

Oleinik then allowed himself to be taken down just so he could lock in the choke and finish it.

Tips for doing the ezekiel choke

If you want to have good success at locking in the ezekiel choke remember all of these tips below. 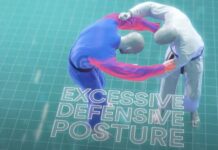 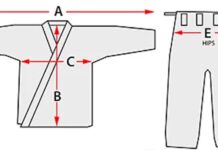 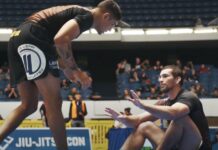