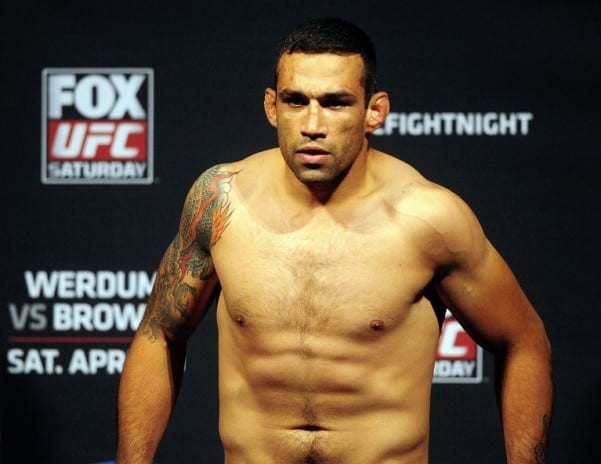 With the dust settled on Fabricio Werdum’s surprising submission win over former champion Cain Velasquez (video highlights right here) in the main event of last night’s (Sat., June 13, 2015) UFC 188 from the Mexico City Arena in Mexico City, Mexico, the once-stagnating UFC heavyweight division all of the sudden has new life heading into the second half of 2015.

‘Vai Cavalo’s’ win over Velasquez as a massive underdog was nothing short of spectacular, yet it seems like much of the post-fight discussion has been centered on the excuses of Velasquez, namely his early gassing due to the Mexico City altitude. He admitted that he didn’t train enough in the highlands of Mexico, only arriving two weeks prior to the fight. Werdum, on the other hand, showed up quite a bit sooner and even took his camp higher up into the mountains to have an extra-added advantage.

But there’s still been more than a little bit of talk that attributed Werdum’s win simply to the condition of Velasquez, a fighter otherwise known for his supposedly otherworldly cardio and pace. That talk only serves to cheapen the win, where Werdum succinctly picked apart the former champ with a varied mix of accurate jabs, Muay Thai knees, and, when the time was right, a fight-ending choke thanks to his world-class Brazilian jiu-jitsu pedigree.

That’s why he should be getting the credit today, because with submission wins over the greats like Velasquez and Fedor Emelianenko, Werdum is not so slowly creeping into the conversation for the heavyweight greatest of all-time. True, he has a number of unimpressive losses on this record (namely to Junior dos Santos and Alistair Overeem), but it’s obvious those came before Werdum reached anything even close to his current form attained under Rafael Cordeiro at Kings MMA.

Werdum granted Velasquez an immediate rematch after their fight last night, but the manner in which he was finished after such a long layoff may not warrant that quite yet. ‘Vai Cavalo’ still has unfinished business with dos Santos, and now he may have the firepower to contend with the challenge that ‘Cigano’ presents.

And the heavyweight division is fun once again, with a wide-open host of potentially entertaining match-ups that just didn’t hold the same weight or relevancy when Velasquez was holding the division hostage the past 20 months. Werdum deserves credit for that, but most of all, he deserves credit for the devastatingly effective fighter he’s become since returning to the UFC in 2012.

He’s won every single fight he’s participated in since then, and regardless of Velasquez’ excuses, the AKA standout simply got out-thought and out-performed by the better man last night.

Time will tell if the former champion will ever regain the top form he once enjoyed, but for now, it’s ‘Vai Cavalo’s’ time to run wild as king of the UFC heavyweight division.