LowKickMMA.com
Home Interviews EXCLUSIVE | Ilia Topuria Wants Anyone In The Featherweight Top 10 Next 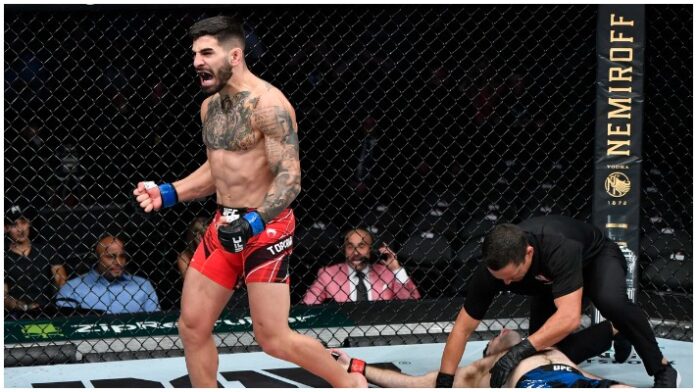 Illia Topuria is looking to continue his rise up the featherweight rankings after picking up the biggest win of his career last time out.

‘El Matador’ squared off against Ryan Hall on the undercard of Dustin Poirier vs. Conor McGregor III on July 10.

The Georgian-Spanish fighter made it look easy as he shrugged off Hall’s unorthodox submission attempts before putting the Ultimate Fighter winner to sleep inside one round at UFC 264.

In a recent interview with LowKickMMA, Topuria spoke about the extreme level of confidence he felt heading into the biggest fight of his MMA career to date.

“I was so ready for that fight,” Topuria said. “I had three months specifically training for him and I am happy with the result.

“I was saying to everyone that I just need one round to finish him.”

Topuria is now ranked at #15 at featherweight and is hoping he’ll get the chance to crack the top 10 in his next fight.

Who do you want to see Ilia Topuria fight next?