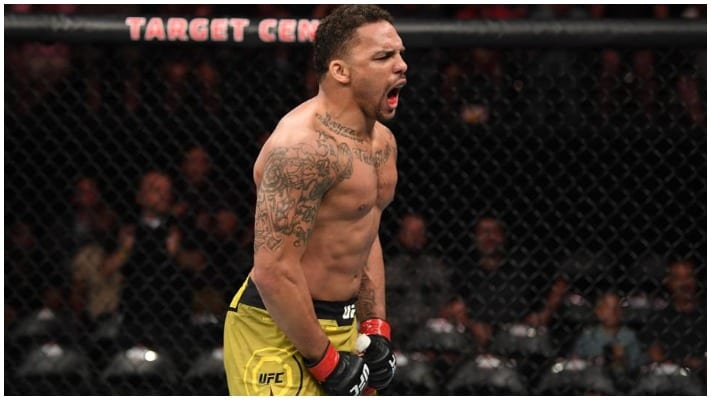 UFC middleweight Eryk Anders plans to beat Krzysztof Jotko by making their fight tomorrow night “as scrappy as possible.” Both Anders and Jotko come into this fight in good form. The winner will be able to go on and potentially move into the rankings. The loser of this high stakes middleweight battle will have some serious rebuilding to do.

Eryk Anders Ready To Scrap For His Third Straight Win

“I’m expecting a fight. A very seasoned guy, former top 10, so he knows what he’s doing,” Anders said. “That’s why I said fights take place everywhere on the feet, against the cage or on the ground.”

“He’s a seasoned vet. He’s been around a long time. (I’m) super impressed with his ability to go out there and get victories. When they are unanimous or a split decision. I think his last fight was a split decision. So, you know, he’s gonna try and do whatever he needs to do to the edge out the win.”

Anders revealed he’s planning to use his usual aggressive, pressure style against Jotko and seems confident that’ll be enough to get him the win.

“I like to pressure people and get in their face and make the fight as scrappy as possible. So, that’s what I plan on doing,” he said.

‘Ya Boi’ is currently riding an impressive two-fight win streak. Once Anders makes it three in a row by beating Jotko at UFC Jacksonville he’s got some big plans. First things first though he wants to compete on Fight Island.

“I think that all the fighters want to fight on fight Island. You know, it’s going to be a big deal. Probably a pay-per-view card. They’ll get you on a boat, put you on a plane, fly you to the middle of nowhere. They’re gonna make a movie about that I think or write a book about it so it would be cool to be a part of that.”

Beyond that, the 33-year-old still has high hopes for the remainder of his MMA career. Anders explained how he wants to become middleweight champion while recognising he’s got a lot of work to do in order to make that happen, he said.

“I think that every fighter especially at this level they want to be champ and so do I. So you know, that’s the motivation and I want to make as much money as possible in the process and have fun while I’m doing it.”

“I need a few man,” Anders admitted when asked about how many wins he needs to become a contender. “The middleweight division is a pretty stacked division. I guess it depends who I fight and how I beat those guys. I think the guys that go out there and get finishes they move up faster. They get those title shots faster. So, I’m going to go out there and knock some people out.”

Do you think Eryk Anders will continue his good run of form by beating Krzysztof Jotko?