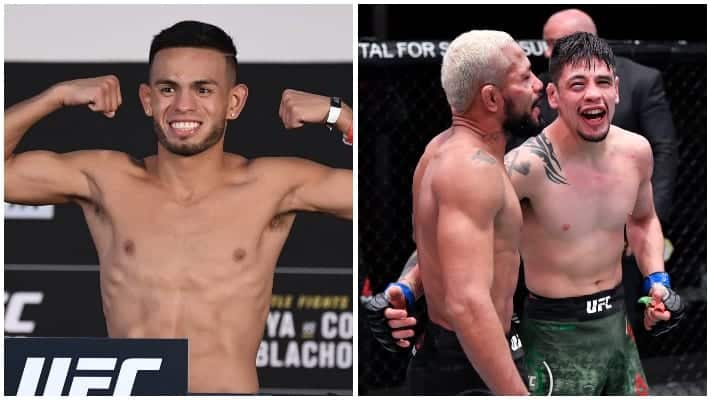 Brandon Royval has high expectations for the upcoming flyweight title fight between Deiveson Figueiredo vs. Brandon Moreno which will take place at UFC 263 on June 12.

Figueiredo and Moreno put on an exciting, Fight of the Year candidate when they squared off at UFC 256 in December.

The pair threw down for five rounds at the UFC Apex in Las Vegas before the judges scored the fight a majority draw and Figueiredo retained his 125lb strap.

Royval expects more of the same when Figueiredo and Moreno rematch next month.

“That’s gonna be the greatest fight ever. I’m sure they’re going to deliver the same exact way as they did the first time,” Royval told LowKickMMA. “I don’t know who’s going to win that. I really think it’s like a point to ask between the two, but I’m excited to watch it. I want to see the adjustments they both made from the first fight. I love it. I learned a lot from watching it too. They’re not going to finish each other or they might, but it’s going to be hard for both of them.”

‘Raw Dawg’ hopes to be challenging the winner of the UFC 263 flyweight title fight in the near future but first he must get back into the win column when he fights Alexandre Pantoja on August 21.

“My goal is a hundred percent getting the title in the future,” Royval said. “Getting a shot and setting myself up for that next point. I don’t know how the division looks after Cody Garbrandt comes back and all that. But I know for me, it’s just chasing that dream and getting that number one spot as quick as possible would be my goal. On top of that, I want to go put on performances. I’m new to the division and I don’t have any fans. I want to show I’m the real deal.”

Do you agree with Brandon Royval? Will Figueiredo vs. Moreno II Be The Greatest Fight Ever?