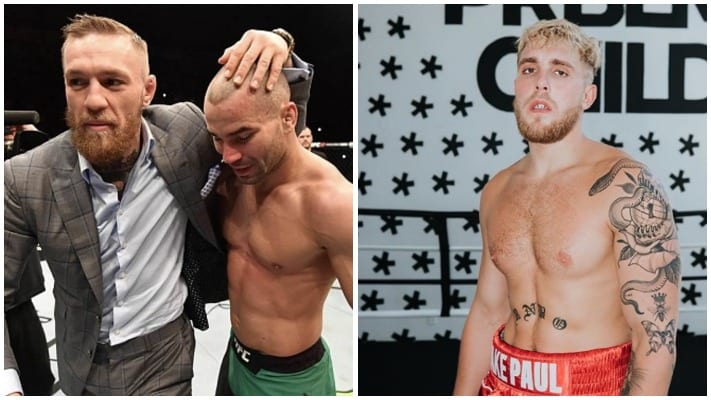 Artem Lobov has shut down talk of his friend and teammate Conor McGregor taking on YouTube celebrity Jake Paul.

Paul has transitioned to boxing in 2020 and improved his record to 2-0 this past weekend on the undercard of Mike Tyson vs. Roy Jones Jr. The 23-year-old scored a highlight-reel knockout win over former NBA player Nate Robinson in the pay-per-view co-main event.

In an exclusive interview with LowKickMMA, Lobov revealed he was impressed by Paul and insisted he has no problem with the YouTuber trying his hand at boxing despite the low level of opposition he faced on Saturday night.

“He clearly has been training, so why not? He wants to get in their why not? It was a real fight,” Lobov said. “I know the guy he has fought wasn’t the highest of levels but still they both wanted to get in and both looked in good shape so why not? If people are interested in it and clearly they were judging by the amount of views that card produced. That’s what it’s all about, you know what I mean? If somebody doesn’t like it don’t watch it.”

Post-fight Paul immediately called out McGregor but Lobov dismissed any chance of that fight actually ever happening, he said.

“In terms of him calling out Conor. Who hasn’t called out Conor? The truth of the matter is calling out Conor gives you more in terms of the media than fighting most of the guys in the world. That’s just the truth of the matter. Everybody calls him out. It gives you the extra clicks (and) the extra exposure… Obviously, that fight will never happen. I mean I’m not even gonna answer that question. I don’t think that’s even a question.”

The YouTuber also mentioned a fight with another of Lobov’s SBG teammates, Dillon Danis. ‘The Russian Hammer’ warned that things would not go well for Paul if he stepped in the boxing ring with Danis, he said.

“I’m not sure. I don’t think so. Dillon is a real fighter. He might have fun with it or whatever but come on. At the end of the day Dillon is a high, high level black belt. He has been in martial arts his whole life so it wouldn’t end well for Jake Paul that fight.

“He’s been working a lot on it, Lobov about Danis’ striking. “Of course, he had the knee surgery so that stopped his training a little bit. He’s working hard and I’m sure he’ll be back very soon. He wants to fight and he’ll be ready.

Do you think Artem Lobov is right? Will a fight between Conor McGregor never happen?