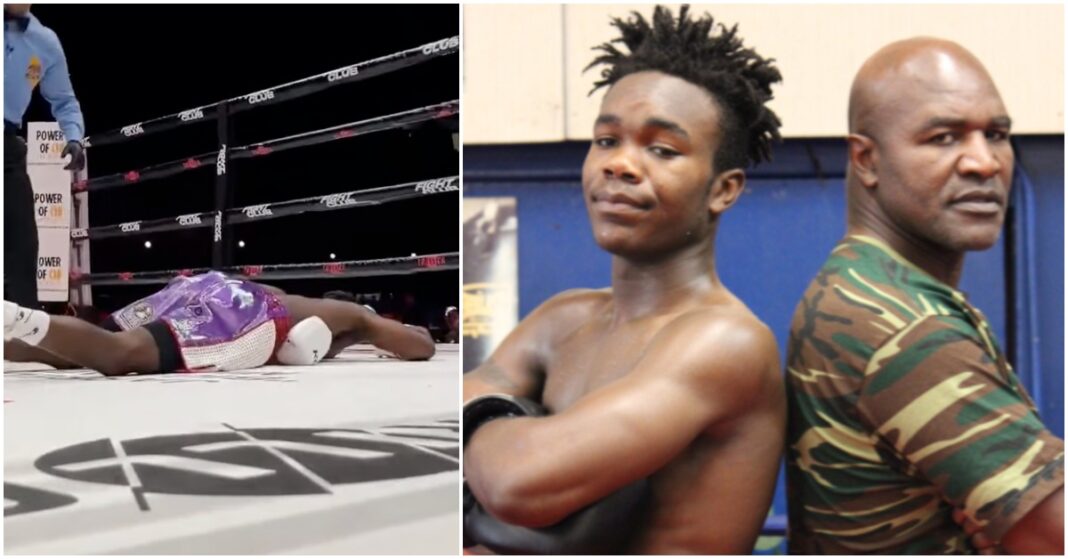 Evan Holyfield, son of boxing legend Evander Holyfield, suffered a major setback in his pro boxing career when he was viciously knocked out by journeyman Jurmain McDonald on Saturday.

Holyfield (9-1-0) was riding a nine-fight undefeated streak when he stepped into the ring at TrillerVerz 5. Emanating from the Kia Forum in Inglewood, CA, Holyfield was poised to keep his undefeated streak alive as a massive -10,000 favorite according to Pro Boxing Odds.

Instead, the 6-5 McDonald would drop Holyfield with a crushing right hand in the second round of the bout, sending Holyfield face first to the canvas. Holyfield was unable to answer the referee’s ten count and appeared to immediately protest the stoppage while still on the mat.

Prior to the loss, Holyfield had an undefeated record of 9-0 with six of those victories coming by way of KO/TKO.

In their first contest, Evander scored a sizable upset over Tyson, but their rematch on June 28, 1997 received significant mainstream attention after ‘Iron’ Mike was disqualified for biting off a one-inch piece of Holyfield’s right ear during a clinch.

Evander officially retired from competition in 2011, but at 58 years old, stepped out of retirement for an exhibition bout against former UFC light heavyweight champion Vitor Belfort at Triller Fight Club in September. Belfort won the fight via first round TKO.

Following the upset, Evan Holyfield took to social media and gave praise to his opponent.

“Blessed to be in good health, and that was good shot no cap! Hope I didn’t disappoint too many folk, but I promise I’ll make up for it. Definitely still have my sights on being world champion!,” Holyfield posted on Twitter.

You can currently stream the TrillerVerz 5 event on trillerfightclub.com.