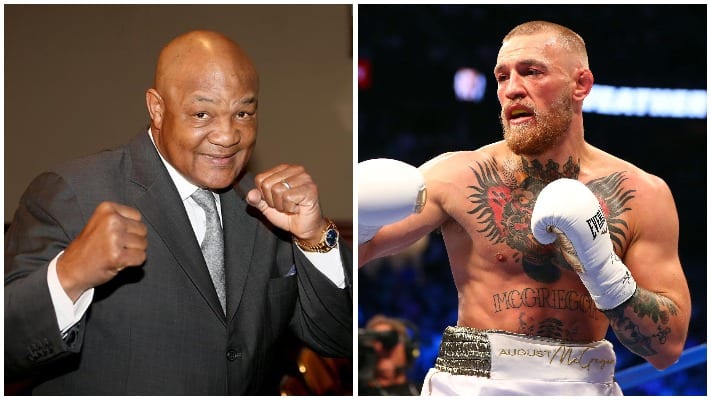 Heavyweight legend George Foreman has called on UFC superstar Conor McGregor to quit MMA and focus his attention on boxing.

‘Notorious’ was lined up to fight Manny Pacquiao later this year. The two men are managed by the same people and the crossover bout was all but done prior to McGregor’s rematch with Dustin Poirier at UFC 257 in Abu Dhabi.

The boxing bout was scrapped when McGregor suffered a second-round TKO loss at the hands of Poirier, who used wrestling and leg kicks early before finishing the fight with fast, accurate punches.

Since losing McGregor has been pushing for a trilogy bout with Poirier.

Foreman though, believes the Irishman should forget about that and focus all his efforts on boxing professionally.

“It’s hard for McGregor to accept it but he’s a better puncher than he is in MMA,” Foreman told the Daily Star. “I’d rather see him in boxing matches now. I think if he has a fight with Pacquiao he can actually beat him – good rules, over 10 rounds, McGregor can beat him. He’s already adjusted to boxing, he’s not going to do good in MMA anymore. Pacquiao is very good as a matter of fact, but McGregor can beat him in a boxing match.”

McGregor has fought professionally just once in boxing. In 2017, he took on Floyd Mayweather in what was dubbed ‘The Money Fight’. To many peoples surprise, McGregor did well early and even won a few rounds. Ultimately though he gassed out and was stopped by Mayweather in round ten.

The Filipino boxing legend is currently being linked to a fight with lightweight contender Ryan Garcia.

Do you agree with George Foreman? Should Conor McGregor quit MMA and focus his attention on boxing full-time?