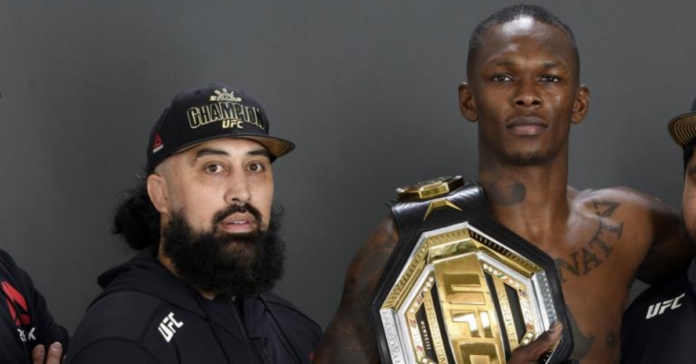 The head coach of Israel Adesanya, Eugene Bareman, had some choice words for the UFC matchmaking in this weekend’s main event. The reigning middleweight champion ‘The Last Stylebender’ will take on the Brazilian slugger Alex Pereira who is merely 3-0 in the UFC.

While Brazil’s ‘Poatan’ earned the title shot with a first-round knockout over the top-ranked Sean Strickland, Bareman feels this match only got made due to the history these two men have. In the kickboxing ring, Pereira holds two wins over the Nigerian-Kiwi Israel Adesanya.

In an interview on The MMA Hour, Bareman explained his thoughts:

“There’s no way he gets a title shot if there wasn’t history there; it’s ridiculous. It’s just ridiculous that someone would get a title shot [so quickly]. There’s history with Israel, and the story and the UFC, hate it or love it, Dana has to promote fights. That’s one thing they do really well. They picked up this history, picked up this would be a great fight that’s going to bring a lot of eyes, and strategically push Alex so he could fight for the title.”

Alex Pereira is an expert counter striker in both kickboxing and MMA. Between the two combat sports, he has a combined win rate of 65% by way of KO/TKO. He is a dangerous opponent for Adesanya who has previously suffered a knockout loss to the former two-division GLORY Kickboxing world champion.

“I see Israel doing what he does best, and that’s accumulating damage, nice clean fight, stays out of danger, and just accumulates damage. Whether he gets a stoppage [or not], I always envision it going the distance, Israel having a clean fight, Israel hitting and not getting hit, then getting back to his friends and family after that to celebrate and all the rest of it.” [Transcript courtesy of Bloody Elbow]