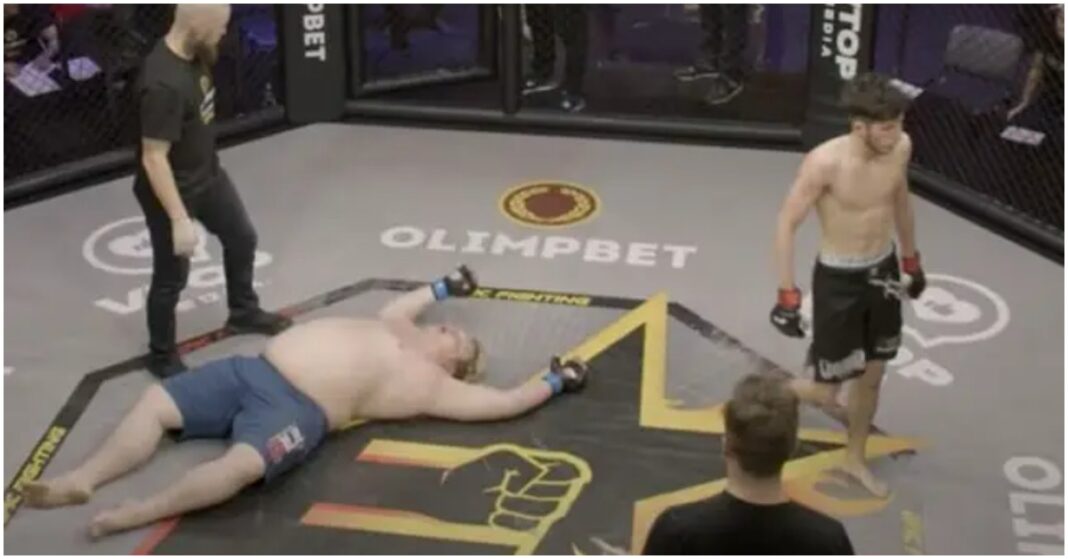 In the latest viral moment from the MMA scene watch 385lb Alexey Belyaev, be knocked out by a sucker punch from his opponent, Vladislav Popov, who weighed just 126lbs.

It seems as if every week we are greeted with a bizarre moment from a Russian MMA show.

Whether it be flying knee at press conferences or intergender fights, the boundaries are seemingly always being pushed.

This time however in an event put on by Epic fighting Championship we see bloggers Popov and Belyaev who enjoyed a 118kg weight and 20cm height advantage, battle it out in an MMA bout.

At the beginning of the bout, we see a messy exchange with both men throwing wildly before Belavay secured a front headlock and sank to the mate with Popov in his clutches.

At this point a cornerman jumps into the cage in an attempt to pull Belyaev off, the confusion gave Popov enough time to spring to his feet, crumbling the larger man with a left hook.

Belyaev was given some time to recover and the match would eventually continue but not before a point was taken from Popov.

Belyaev would end up winning in the second round due to ground and pound.

Who Are Epic Fighting Championship?

Although you may not know them by name, you will most certainly recognize some of the moments the promotion has produced.

Seemingly taking some the inspiration of some of the MMA freak show fights of old such as Kieth Hackney (91kg) vs Emmanual Yarborough (270kg) and taking it to the next level.

The promotion has put on such bouts as a 60kg woman facing a 240kg man, a two on one in which a 75-year-old and his grandson took on a 55-year-old woman, and many more outlandish matchups.

Do you like the bouts that Epic Fighting Championships put on? And if so what would like to see next?