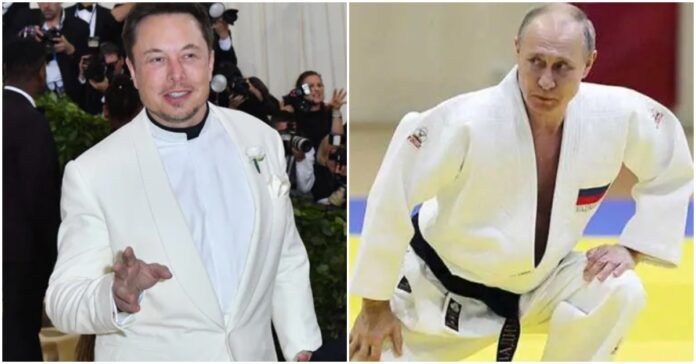 CEO of Tesla Elon Musk has recently taken to Twitter to challenge Russian President Vladimir Putin to a fight in the hopes of freeing Ukraine.

The Entrepreneur, who is known for his social media presence and antics, has managed amassed a following of well over 70 million followers on his Twitter account alone.

“I hereby challenge Vladimir Putin to single combat.” Musk stated, “Stakes are Ukraine” as he wrote the country’s name in Ukrainian.

“Do you agree to this fight?” as Musk tried to provoke a response amid the Russian and Ukraine dispute.

Musk’s peculiar challenge was one of many tweets over the course of a three-hour period, where the South-African even incorporated a Shakespeare line from Macbeth, as he recited “By the pricking of my thumbs, something wicked this way comes.”

The Tesla owner despite his wealth and influence within the world possibly might be biting off more than he can chew in his challenge against former judo Black Belt as well as the former head of operations for KGB.

Putin was made an honorary president of the International Judo Federation in 2008, however, it has since been revoked due to his ‘special military operations; in Russia’s neighboring country, Ukraine.

Former boxing heavyweight world champion, Wladimir Klitschko, has been serving in the Ukrainian Army alongside other Ukrainians in an effort to help the innocent people suffering due to Putin’s invasion of his home country.

Klitschko has been updating his social media, where he can use his platform to show the world the truth about the “special military operation” led by Putin, labeling it as a “senseless war”.

Just today he posted a video to his Twitter account as he reveals the impact a Russian missile attack had on normal civilian life, as the 45-year-old passionately urges for more help.

Do you think Elon Musk could win in a fight against Vladimir Putin?