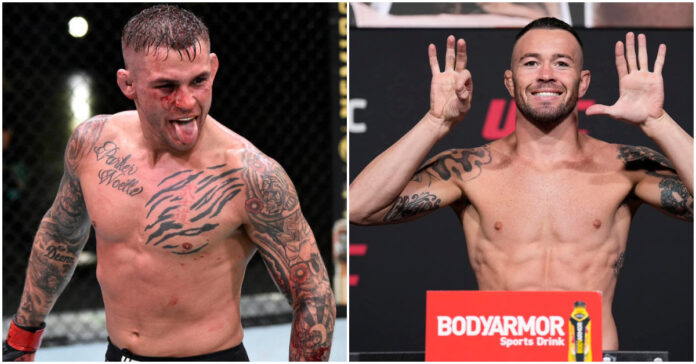 Dustin Poirier has seemingly accepted the challenge of taking on Colby Covington.

Former interim UFC lightweight champion Dustin Poirier has been out of action since his last shot at the title against Charles Oliveira in December 2021. After beating Conor McGregor twice last year, the ‘Diamond’ has seen his stock go up immensely. Poirier made his intentions of wanting money fights clear as he remains open to a fourth fight against the ‘Notorious’.

Another man who Poirier has been beefing with for the past several months is his former ATT teammate Colby Covington. The pair crossed paths with each other in the promotion after Covington trash-talked Jorge Masvidal and other members at the gym.

During a press conference for UFC 271, Dustin Poirier declared that he would never fight ‘Chaos’ in the UFC. ‘Diamond’ said that it was “on sight” with Covington.

Covington took the opportunity to call out Poirier after his win over Masvidal at UFC 272. While the 33-year-old was against the idea at first, it seems like he had a change of heart as he took to Twitter to post a series of messages.

Following his initial tweets, a fan responded to Dustin Poirier suggesting he fight Covington. Poirier fired back immediately with an affirmative response to the challenge.

Poirier is aiming to take on Covington this July 30 at UFC 277.

It remains to be seen whether these two will be matched up with each other. Covington has been under the radar since his alleged physical altercation with Masvidal in March. Although Poirier wants to fight at 170-lbs now, Covington will likely be the toughest matchup for him outside of taking on the welterweight king Kamaru Usman.

Khamzat Chimaev has also been gunning to fight Covington as he believes ‘Chaos’ to be the next step up for him. If McGregor is able to solidify a return date, Poirier might prefer to hang on the sidelines a bit longer.