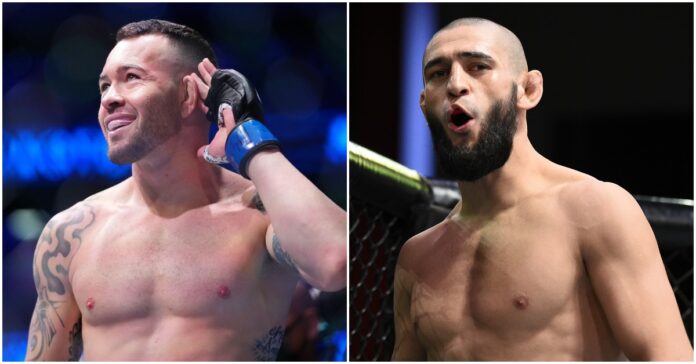 Khamzat Chimaev gives his take on how a fight between Colby Covington and him could potentially play out.

In a recent interview on The MMA Hour, the newly formed Smesh Bros, Darren Till and Khamzat Chimaev sat down to talk about their unforeseen coming together and potential matchups in the Welterweight and Middleweight divisions.

Chimaev, who is undefeated in his ten professional fights, is currently on an unprecedented hot streak in the UFC having won his first four fights without entering the third round once. He is finally set to face what seems to be a formidable foe in #2 ranked Welterweight Gilbert Burns at UFC 273.

When asked what his goal was after Burns, Chimaev was happy to face off against yet another top contender if the champion was not ready to fight. The current 170lb title holder Kamaru Usman has been sidelined recently due to hand surgery, but is rumored to be targeting a return against Leon Edwards during International Fight Week in July.

‘Borz’ stated that: “If (Kamaru) Usman (will be out for a long time), I’d fight with Colby (Covington), and I’d kill that guy. Nobody could (really) knock him out.”

A commanding win over Burns could potentially set up Chimaev for a title shot against the winner of Usman and Edwards. With some questioning his championship contention legitimacy, Chimaev believes he is primed and ready for a title fight and is eager to prove it against anyone.

“They talk about, oh you didn’t fight somebody in the rankings. You know. Like now, if I beat this guy number two. What are you going to say?”

The UFC Welterweight division is a murders row of valiant contenders vying to dethrone the current pound-for-pound king. Someone who has faced Covington twice now. A matchup that interests Chimaev.

Do you think Khamzat Chimaev is going to smash Gilbert Burns? How would he fare against Colby Covington?