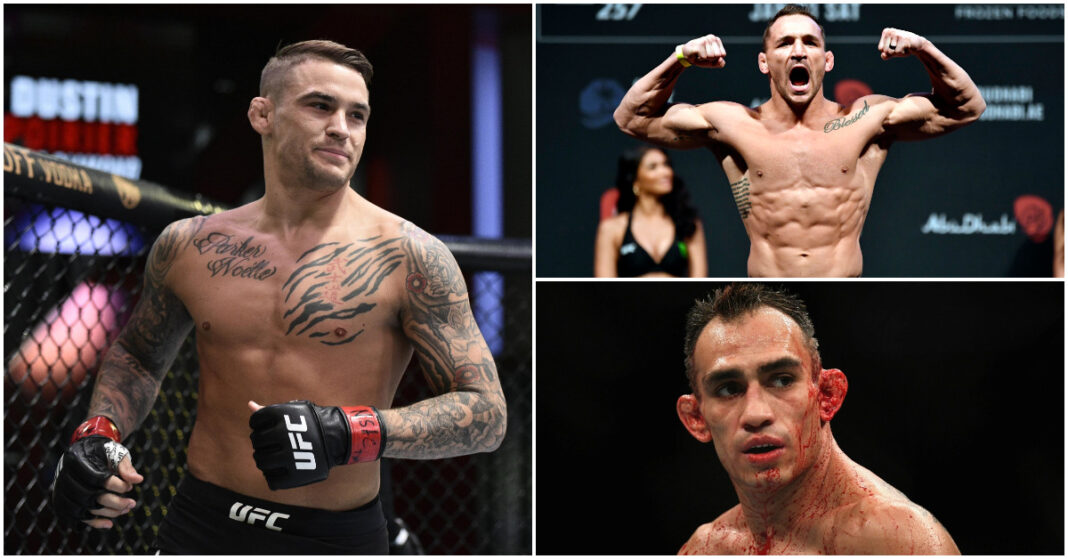 Former UFC interim lightweight champion Dustin Poirier has revealed his pick for who he will likely fight next.

Dustin Poirier believes that he will probably face the winner of Michael Chandler vs. Tony Ferguson in his return to action inside the cage. As one of the biggest stars of the UFC, ‘Diamond’ has fought some of the promotion’s very best. His two wins against the biggest draw of the sport, Conor McGregor, elevated him to superstar status last year.

Poirier hinted at moving up to welterweight after eyeing a potential matchup against Nate Diaz but talks of the fight have died down since. He was called out by Colby Covington for a fight at 170 but expressed no desire in taking the fight. With so much speculation surrounding his next opponent, the man himself responded to a fan’s tweet suggesting that he takes on the winner of Chandler-Ferguson this May 7.

Michael Chandler will take on Tony Ferguson this weekend at UFC 274 in one of the most stacked cards of the year. ‘El Cucuy‘ has not been enjoying the best of forms as he reels off three losses in a row against two of the same opponents Chandler lost to. Those two men are Justin Gaethje and reigning UFC lightweight champion Charles Oliveira who will be headlining the card in a title fight.

All three athletes are at the highest level and are former title challengers. Poirier was submitted via a rear-naked choke by the former lightweight champion Khabib Nurmagomedov when he fought for the title first in 2019, and then for the second time against Oliveira last December.

Chandler was close to winning the title but Oliveira came back in the second round to win the contest. Poirier also suggested that the UFC might be saving him for a fourth showdown against Conor McGregor but maintains he has not been given any indication into his next opponent.

Who do you want to see Dustin Poirier fight next?