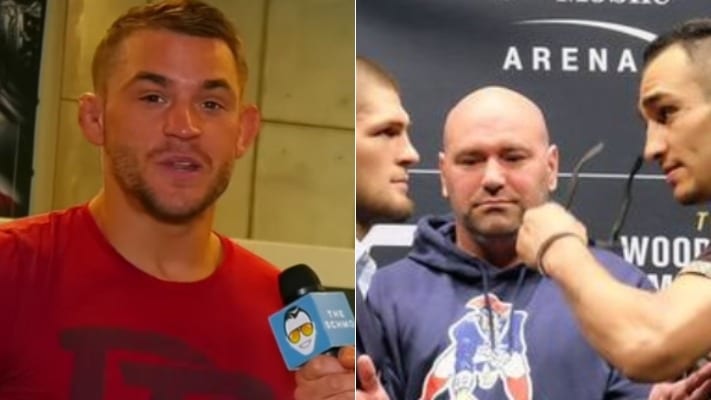 Nurmagomedov defends his lightweight title against Ferguson in the main event of UFC 249 on April 18. It’s a fight that was previously booked four times only to never come to fruition.

Hopefully, the fifth time is a charm as it’s a fight not only fans, but fighters as well have been waiting to see for years. Poirier is one of them as he broke down the highly-anticipated matchup:

“It’s a fun fight,” Poirier told The Schmo in a recent interview. “I’m excited to see it happen because it’s in the lightweight division and the fight was supposed to happen so many times before. I think Tony could cause problems for Khabib with the elbows from the bottom and also just his unpredictability on the feet. He has a crazy scrambling ability, does front rolls and really weird stuff.

“But once Khabib gets his hands around Tony, I don’t think Tony’s going to get back up honestly. I think Khabib wins that fight but we’ll see. That’s the beauty of MMA.”

Poirier speaks from experience. After all, he suffered a third-round submission defeat to Nurmagomedov in the UFC 242 headliner back in September.

“The Diamond” notably looked flustered at how powerful Nurmagomedov was when he was being controlled on the ground.

But as he mentioned, anything is possible in mixed martial arts, and Ferguson is one of the most unpredictable and unorthodox fighters in the entire promotion. If anyone could stop “The Eagle,” it’s definitely him.

What do you make of Poirier’s comments?