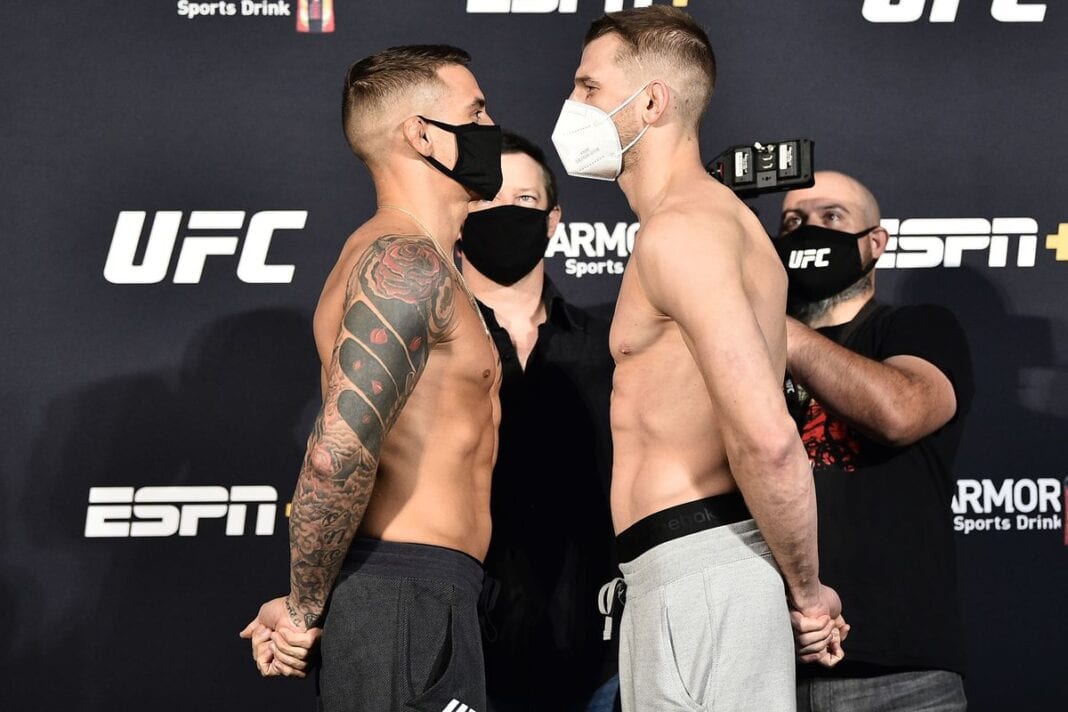 IT’S TIME! Lightweight contenders Dustin Poirier and Dan Hooker are about to get going in our main event of the evening. The former interim champion is fighting for the first time since his failed shot at 155lb king Khabib Nurmagomedov. He’ll face Hooker who is riding a three-fight winning streak and hoping to get the biggest win of his career.

Round 1: Both men open up with kicks. Dan Hooker lands the first significant shot of the fight – a flush left hook. Dustin Poirier looks a little undersized and will have to overcome that to get inside on Hooker. The New Zealander has landed three calf kicks now and they are starting to get a reaction. Poirer dips under a shot and initiates the wrestling. He backs his opponent to the fence but is unable to capitalize on it. Back to the center and Poirier lands two body kicks. ‘The Diamond’ is starting to put his strikes together and is doing well to stay out of danger. Big kick to the body followed by a big punch. Poirier lands another huge right over the top as the round comes to an end.

Round 2: Hooker opens up early going to the body and head. Poirier lands a couple of big shots and Hooker fires back with his own one-two – clearly the biggest strikes of the fight. Poirier is shooting for the takedown. Eventually they separate and Poirier is able to land several bombs on his opponent. Both guys are landing huge power shots now this is turning into a war. Hooker lands a low kick but eats a one-two for his effort. Poirier is landing a lot but when he misses its big. Huge right by Poirier. Huge left from Hooker. Both men are a bloody mess now. Poirier lands a one-two, Hooker returns with a five punch combo. He’s backing his opponent up. Poirier is trying to fire back off the fence but he’s eating shots as the round ends. WHAT A ROUND!

Round 3: A slightly slower start to round three. Both men are throwing the odd shot during the opening 60 seconds. Poirier lands a big right and the fight comes back to life. Hooker is firing back but he’s eating a lot of punches at the minute. Hooker shoots in for a takedown but is caught in a guillotine choke. Poirier has it locked up but his opponent slips out of it. Poirier is staying busy on the bottom. He’s trying subs and landing elbows. Poirier wall walks and gets back to his feet eating a knee on his way up. As they break Poirier lands two big shots – Hooker is so tough! The pair exchange pop shots as the third round comes to a close.

Round 4: The opening minute sees both men throw smaller shots. Poirier throws and kick and Hooker grabs it and secures the takedown. He pops back up but Hooker jumps on his back and manages to get the fight back to the floor. Poirier gets up again and secures his own takedown. He quickly secures a mount postition. Hooker is turning his back and Poirier is landing lots of ground and pound. Poirier jumps to the back and tries to secure an arm bar. It looks super tight but Hooker survives and eventually ends up on top. Poirier pops back up but Hooker immediately shoots in for another takedown. Poirier grabs for another choke but Hooker shakes it off before the rounds ends.

Round 5: Poirier opens up with a one-two before missing with a wild overhand. Hooker falls shorts with a couple of shots and is punished by a big shot. Both men continue to trade punches until Poirier nails Hooker with a one-two which forces a takedown attempt – he gets it! Poirier is using the wall to try and get up but he gives up his back in the process. They break and Poirier goes back to his striking. Hooker attempts another takedown but is unable to get it. He pushes Poirier up against the cage but doesn’t seem to have the energy to complete his attempt. Poirier lands a couple more shots and Hooker desperately shoots in. He ends up on bottom eating shots as the horn sounds to end the fight.