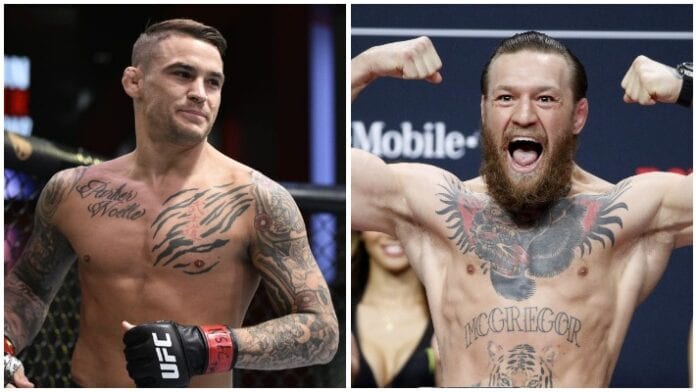 Dustin Poirier believes there is an ulterior motive in Conor McGregor wanting to fight him next.

McGregor recently claimed to have accepted the UFC’s offer for a fight with Poirier, but laid out the condition that it take place before the end of the year as opposed to early next year.

As of now, there is no update on the fight as all we can do is wait. But as for why McGregor wants this particular fight, Poirier believes it’s to help him prepare for a potential boxing match with Manny Pacquiao.

“Going back to why I think he wants this fight, it’s because he’s angling to fight Pacquiao. That was in the news,” Poirier said on “THE FIGHT” with Teddy Atlas (via MMA Junkie). “So I don’t know if the UFC wants him to fight one more time before they allow him to fight Pacquiao or if he just wants to get one more this year before starting next year with the Pacquiao fight, but what better way to do it against another southpaw?

McGregor had previously hinted he was fighting Pacquiao in a lucrative boxing match, though that was before talk of a Poirier fight came up. However, it’s also possible that he wants to fight Poirier simply because of what UFC lightweight champion Khabib Nurmagomedov recently stated.

“Khabib, the current champion, said that if Conor or Tony fights me and wins then he’ll give him another title shot, so that’s in his head too,” Poirier said. “I think that’s creating a perfect storm, and it’s coming together that he’s coming out in public and saying, ‘Hey, I want to fight Dustin Poirier this year.’”

Whether it happens or not remains to be seen. But one thing is for sure — Poirier will not go into a potential rematch with strong emotions like he did for their first meeting with McGregor which saw him lose via first-round knockout.

“I’m not going to go in there and fight with anger,” Poirier added. “I’m going in there and fighting with skills. My last few fights I just felt something different happening in the lead-up to the fight. It was less pressure. In a weird way I care less.

Do you agree with Poirier?