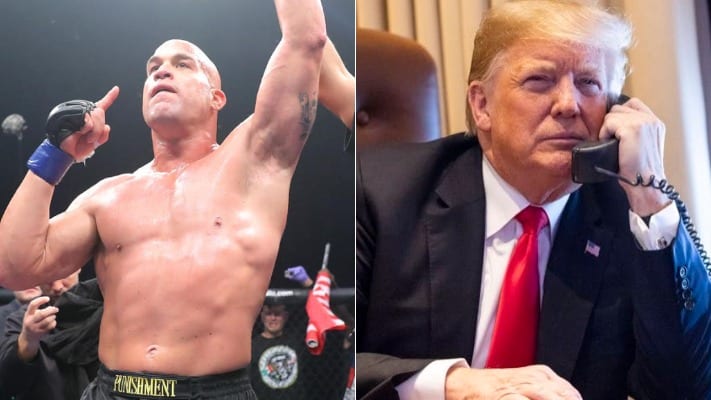 United States President Donald Trump has been no stranger to the mixed martial arts (MMA) scene in 2019.

President Trump has been very vocal about his support for UFC welterweight title challenger Colby Covington. Also, President Trump was in attendance for UFC 244 inside Madison Square Garden in New York City, which was headlined by the Baddest Mother F*cker Championship fight between Nate Diaz and Jorge Masvidal, in November.

Last night (Sat. December 7, 2019) former UFC light heavyweight champion Tito Ortiz, who has been very vocal about his support for the President, competed in the main event of Combate Hidalgo against ex-WWE star Alberto El Patron. Ortiz made quick work of El Patron, taking him down and submitting him with ease.

President Trump has now taken to Twitter to congratulate Ortiz on his “big win.”

With his win, Ortiz captured Alberto El Patron’s old WWE Title. The stipulation for the fight had El Patron putting up his WWE gold, while Ortiz put his UFC title up for grabs. However, the former 205-pound champ emerged victorious in his Combate Americas debut. He’ll likely fight under the promotion’s banner again in 2020.

What do you think about President Trump congratulating Ortiz on his victory?