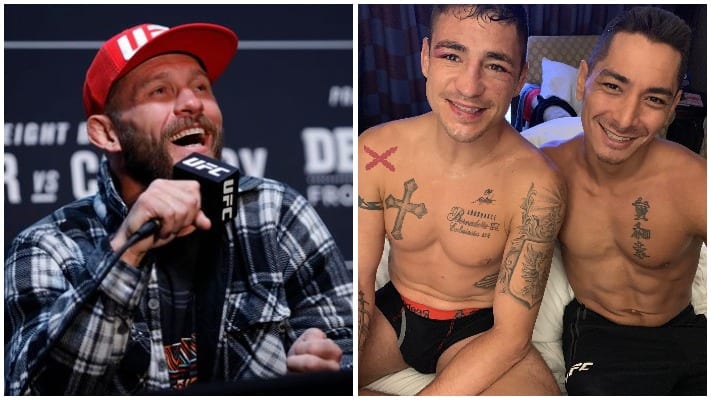 Donald Cerrone was supposed to fight Diego Sanchez at UFC Vegas 26 this weekend.

Unfortunately, the bout won’t take place as ‘The Nightmare’ was recently cut by the promotion.

Sanchez was let go ahead of his retirement fight after his manager and coach, Joshua Fabia, requested all of his medical records, sparking fears within the promotion that the Ultimate Fighter Season One winner was suffering from some type of long-term medical issue.

The UFC requested Sanchez confirm he is healthy to compete against Cerrone on May 8.

On the advice of his lawyer, Sanchez refused to do so and was therefore cut.

Luckily for ‘Cowboy’, Alex Morono has stepped up on late notice to fill the gap left by the departing Hall of Famer

Speaking to media ahead of UFC Vegas 26, Cerrone was sympathetic towards Sanchez who he believes is being misled.

“It’s hard to be mad at (Sanchez) now because I don’t think it’s him guiding the horse,” Cerrone said. “I think he’s just running blind, and this other jamoke, his new lover, is showing him down the path. I don’t know. Can’t really be mad at the kid, or the old man, I should say. But really it’s his cult leader and lover that took over his life, and I feel bad for you, Diego.”

Cerrone went on to reveal one of his old training partners beat up Sanchez’s coach at a bar.

“I never have met him,” Cerrone said. “I never ever have. I know the guy that whipped his ass at the bar. I used to train with the guy, and that kid was talking about his death punch and how he was going to kill the dude, and my buddy whipped his little motherfucking ass all over the bar. So the death punch did not work. It was unsuccessful. This guy no longer fights, no longer trains. He just said, ‘I’ll beat your ass.’ Then he did. The MMA community in New Mexico had a chuckle over that.” (Transcribed by The Mac Life)

Are you surprised to hear Donald Cerrone confirm Joshua Fabia’s death punch does not work?