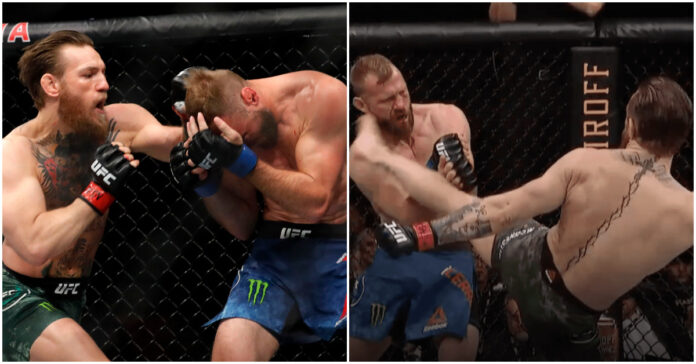 Donald Cerrone has revealed that he did not want to be in the cage with Conor McGregor at UFC 246.

UFC veteran Donald Cerrone will return to the octagon after about a year’s hiatus since his last outing against Alex Morono at UFC on ESPN 24. He will take on another seasoned pro in Joe Lauzon when the two go to war in what could very well be their last fight at UFC 274. Lauzon will come back to competition after an extended layoff following his most recent bout with Jonathan Pearce in 2019, the same year we last saw Cerrone win.

It’s been an emotional road so far for Cerrone, who struggled to hold back tears while talking about his son’s influence on his upcoming fight this weekend. Given the possibility that this could be the last time we get to witness ‘Cowboy’ in action, sentiments are running high with nostalgia.

In an interview with ESPN, Donald Cerrone talked about his loss against ‘The Notorious One’ and revealed that he did not want to be in the octagon at the time.

Cerrone recognized the magnitude of the event and courageously opened up about his mental state for the bout.

“On the Conor McGregor fight, the biggest eyes, millions watching, my moment, and I didn’t wanna be there. I cannot answer that any clearer. It was such a strange feeling.”

He talked about how McGregor gave him the opening to quit, and despite having an abundance of experience, he took it that day.

“When I was in the back, I didn’t even wanna go out there. So when Conor gave me the door, I took it. That was my inner bi**h. I took the door, let’s get out of here. It’s that easy. It’s that easy in a fight to get out, and I took it. I have to live with that every day.”

‘The Mystic Mac’ took home a knockout win with a head kick and strikes in just 40 seconds of the opening round.

Donald Cerrone vs. Lauzon Open The Main Card Of UFC 274

As much of a slump as Donald Cerrone has been going through, his opponent has not been doing much better either. In what looks to be at least one of the men’s retirement fights if not for both, the stakes are high for Joe Lauzon as well. Although ‘J-Lau’ kept the door open and expressed interest in fighting again given it makes sense to him, an unfavorable outcome this Saturday could change it all.

In a card stacked to the brim with talent, Cerrone and Lauzon will kick off the main show at UFC 274. Two title fights will follow for the headliner and co-main event when reigning UFC lightweight champion Charles Oliveira will defend his gold against Justin Gaethje in the main event.

UFC women’s strawweight queen Rose Namajunas will feature in the co-main event when she takes on Carla Esparza in a rematch about eight years in the making since their first encounter.

Do you think Donald Cerrone will win against Joe Lauzon at UFC 274?