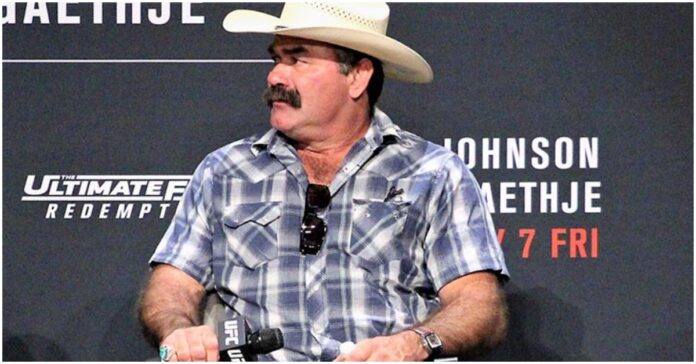 UFC Hall of Famer Don Frye was caught on video punching a fan following an argument at UFC 270.

It appears for some fighters that you never really lose your ability to throw a punch and that seems the case for Don Frye.

The former professional wrestler got into an altercation with a fan during UFC 270 and punched him in the face after claiming the man challenged him to a fight.

Frye can be seen on the video having a discussion with the man before throwing the punch and being moved away by venue security.

Frye entered the UFC in spectacular fashion. His first matchup in the promotion saw him defeat 410-lb Thomas Ramirez at UFC 8 in just 8 seconds, at the time this was the fastest recorded KO in the UFC.

On the same night, Frye would pick up two more victories over Sam Adkins and Gary Goodridge all in a combined three minutes and ten seconds winning him the UFC 8 tournament. Frye would continue his winning streak picking up three more victories along the way, before tasting defeat for the first time in the promotion via TKO at the hands of Mark Coleman at UFC 10.

Frye would bounce back from his loss incredibly by going on a 9-fight winning streak including a second victory over Gary Goodridge and a decision victory over Ken Shamrock. During this winning streak, Frye would retire from MMA to pursue wrestling opportunities in Japan but felt the desire to come back and returned to the sport and to Pride to take on Gilbert Yvel.

Frye would find success in multiple promotions, holding wins in the UFC, Pride, and K1. The 56-year-old retired from the sport in 2011.

Frye would be inducted into the UFC Hall of Fame in 2016 and only recently came out to reveal to fans he was considering a return in the hopes to take on Francis Ngannou.

What do you make of Don Frye’s incident at UFC 270?