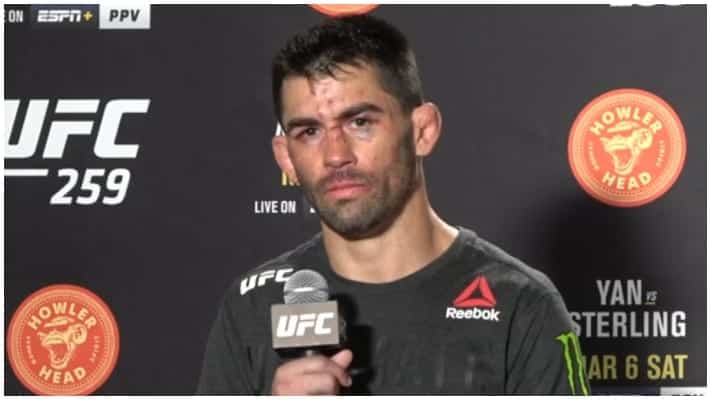 Cruz picked up his first win since 2016 against Casey Kenney at UFC 259.

During his chat with Joe Rogan, Cruz called for a charity fight with Hans Molenkamp who works for UFC sponsor Monster Energy.

‘The Dominator’ claimed Molenkamp has been “holding fighters hostage” with Monster sponsorships.

“It’s been a long amazing journey up to this point,” Cruz said. “I would love to get a charity fight lined up, in a day and age where a lot of fake people can take pictures next to Lamborghinis.

“A guy named Hans Molenkamp has been holding a lot of fighters hostage, saying he’s an awesome pro fighter and picking his fights.

“How about we do something for charity? He’s got a 100-pound advantage. I think we can put on a show with a lot of money.” (Transcribed by SCMP MMA)

During the UFC 259 post-fight press conference, Cruz clarified his call out of and explained his issue with Molenkamp.

“He’ll probably love that he’s getting plugged like this, to be honest,” Cruz said. “So, it’s actually a benefit for him. He should thank me.

“I’m not here to get used. Look at my face. Look at my body. I get beat to death for a living. So, when you try to force me, you text me if I don’t comment on your page. If I don’t give you an interview, you’re gonna take what pays my bills. What are we doing? Monster sponsors me not you.

“This was a call out because he calls himself a pro fighter. He has got 100lbs weight on me and I’m like we can make this a win-win situation. Let’s do a charity event. Monster picks the charity and we scrap it out. He says he’s got three pro fights. Let’s prove it. Put your money were your mouth is. You’ve got a little tiny guy calling you out. For charity, not for anything else. Why not?

Cruz went on to say he has no issue with Molenkamp.

“I don’t have an issue,” Cruz said. “I just want charity to make some money. I have no issue with this guy.”

The former 135lb champ is simply frustrated by the fact someone is trying to force him and other fighters to do personal PR in exchange for sponsorship.

“It’s not trapped in a contract,” Cruz said. “It’s forced to give him clout, forced to hype him up If I want to make money. Monster pays me. So, it would be the equivalent of does the UFC pay me? Yes. Does Dana White own the UFC? Yes. So, if Dana White says. ‘Hey go on my page and like my page.’”

Do you think Monster Energy will take notice of this complaint from Dominick Cruz?