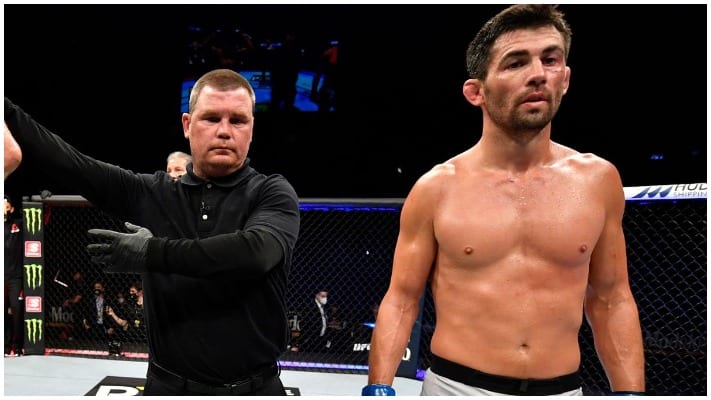 Former UFC bantamweight champion Dominick Cruz has requested that Keith Peterson not referee his fight against Casey Kenney at UFC 259 this weekend.

Peterson was infamously the man in the middle when Cruz squared off against Henry Cejudo last year. ‘The Dominator’ went on to suffer a second-round TKO loss – a stoppage he vehemently contested after the fight. Cruz even accused the veteran referee of smelling of alcohol.

“That was an early stoppage, 100 percent – I’m positive of it. I wish there was a way to keep these refs a little more responsible sometimes. The guy smelled like alcohol and cigarettes, so who knows what he was doing. Definitely (he did). I wish they drug tested them.”

Almost one year on and Cruz is still holding a grudge against Peterson. The 35-year-old revealed at the UFC 259 pre-fight press conference that he has asked the commission to not appoint Peterson as the referee for his upcoming fight.

“I made the request, and you hope the commission can honor your request. But when it all comes down to it, they run things, right?” Cruz said. “They have control over everything.”

“(UFC vice president of regulatory affairs) Marc Ratner alluded he was able to make that possible for me,” Cruz added. “It’s not that I hate this guy or anything. This is a business thing, and I did not feel like he was doing his just. There are plenty of refs. I’ve never had an issue with any other ref in the history of my career – before the fight started. I had an issue with him before the fight started in the locker room. So that’s what made me stand by the fact that I’d prefer another ref.” (Transcribed by MMA Junkie)

Do you think Dominick Cruz is right to request Keith Peterson does not referee his fight at UFC 259?