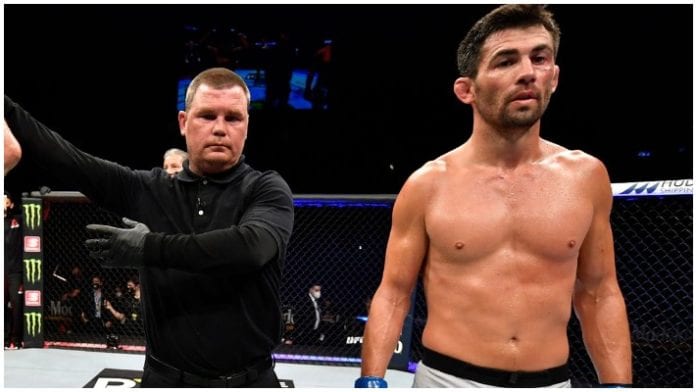 Cruz got dropped by a powerful knee in round two of his fight against ‘Triple C’. The bantamweight champion swarmed landing several unanswered shots before the referee stepped in and waved the fight off. ‘The Dominator’ although eating shots was clearly working back up to his feet at the time of the stoppage, which he immediately took issue with.

Cruz continued to protest Peterson’s stoppage while speaking on the UFC 249 post-fight show on ESPN, he said.

“That was an early stoppage, 100 percent – I’m positive of it. I wish there was a way to keep these refs a little more responsible sometimes. The guy smelled like alcohol and cigarettes, so who knows what he was doing. Definitely (he did). I wish they drug tested them.”

Cruz went on to say he’d have preferred to have Herb Dean calling his fight and wondered out loud if he even had the ability to pass on a referee who had been appointed by the commission, he said.

“I know Herb Dean is good. He’s one of the best refs. I immediately when I saw that ref I was like, ‘Man, is there a way to veto a ref and get a new one?’ I wonder that.”

While clearly still annoyed by the early stoppage Cruz ultimately accepted responsibility for taking a big shot and giving the referee a call to make, he said.

“I’m not a guy to make excuses. If you put yourself in the position for the ref to mess something up in a stoppage, then you do so.”

Do you think Dominick Cruz is right to protest referee Keith Peterson’s stoppage of his UFC 249 title fight against Henry Cejudo?