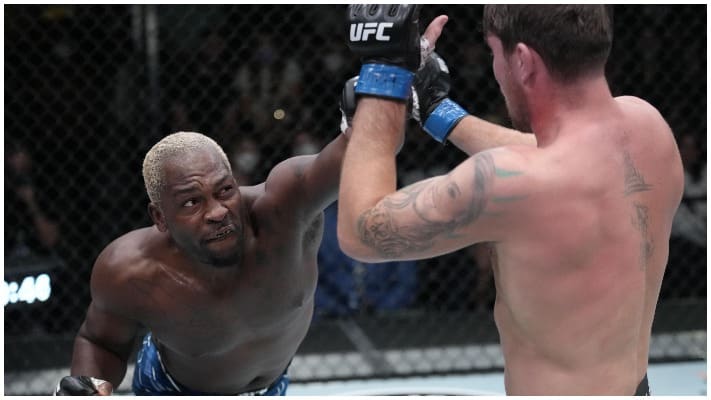 Derek Brunson highly doubts the legitimacy of Darren Till tore his ACL prior to their meeting at UFC Fight Night 191.

Brunson was a guest on Ariel Helwani’s ‘The MMA Hour’ and spoke his mind about many things. He talked about his prior fight with Israel Adesanya but, he touched on his latest fight against Darren Till. Brunson won that main event matchup against Till via third-round submission. There weren’t many points in the fight that trended toward Till either.

Brunson had his own thoughts about the possibility of Till having a torn ACL going into the fight, “Listen, I don’t care about none of that. Till is the pull-out king. If he was that injured, he would have pulled out. Till was doing hang cleans and squats and deadlifts like two weeks ago. He didn’t tear his ACL. And he never said that; that’s what his coach said. I saw him at the UFC Institute, man. He was doing box jumps, hang cleans, squats, all of that.” (Sportskeeda)

Derek Brunson has caught the middleweight challengers’ attention, as he may be next in line for a possible title fight after the Whittaker vs Adesanya fight. The only obstacle standing in the way of Brunson’s claim at a title shot is Jared Cannonier. Both of these men have been beating anyone that has been put in front of them. Cannonier’s most recent win was over Kelvin Gastelum( The closest a middleweight fighter has come to beating Izzy).

Do you agree with Derek Brunson? Is Darren Till’s coach lying about the scouser suffering a torn ACL?