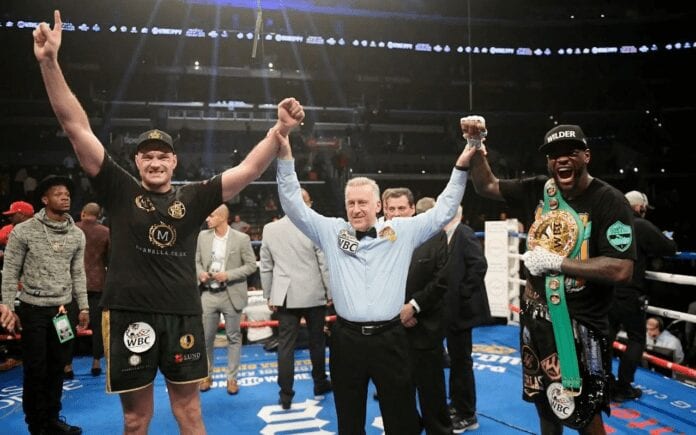 It’s fight week! The eagerly anticipated heavyweight rematch between Deontay Wilder and Tyson Fury is finally upon us. On Saturday 22 February these two men will square off once again for the WBC title at the MGM Grand in Las Vegas, Nevada.

The first fight ended in a controversial draw. Fury outboxed his opponent for much of the bout but Wilder scored two knockdowns which meant the judges couldn’t split the fighters.

Although a disappointing conclusion at the time, the draw has allowed one of the biggest rematches of recent years to come into being. It has become so big because no-one, not even the bookmakers have a clue what’s going to happen.

Both men are priced 10/11 to win the fight, so you’ll have to find another avenue for your bets if you want to make serious money on this one. If your going to be betting this weekend check out bettinglounge for all the best betting sites, offers and bonuses.

American heavyweight Deontay Wilder is one of the biggest punchers in boxing history. The 43-fight veteran has amazingly stopped every fighter he’s been in with besides Tyson Fury. Unsurprisingly the bookmakers think if he’s going to pull it off it’ll be by knockout. With this in mind they are offering 6/5 on him to score the knockout victory.

In contrast the ‘Gypsy King’ is at a hefty 5/1 to get a knockout win. Despite not being known for having serious power, Fury still has 20 finishes on his record. At times he hurt Wilder in the last fight, so don’t be surprised to see him pour it on this Saturday night and make some punters big money by getting a KO win.

Whilst the oddsmakers doubt Fury can score a knockout win they seriously doubt Wilder will win this one on the cards. The 34-year-old from Alabama is priced at 11/1 to win this fight via the judges’. In fairness they’ve got good reason for this assumption. Wilder’s obvious lust for finishing his opponents combined with his often-sloppy style causes him to lose rounds before ultimately scoring the finish. He’s not a point scorer, he’s not coming to win a decision this weekend and that is reflected in the odds.

On the other hand, Fury is a master technician and elite level boxer in every sense of the word. His style is hit and don’t get hit, something he’ll surely want to employ against heavy hitter Wilder. If he’s able to successfully execute that tactic Fury is likely take this fight to the judges and get the decision, he felt he had earned in the first fight. Anyone fancying Fury to do just that will find odds of 13/8 on the Manchester heavyweight scoring a decision/technical decision victory. They aren’t the biggest so you may need to bet big, if your confident Fury gets it done over 12 rounds.

Finally, we can’t’ forget about the draw. Anyone fancying a repeat of the first fights result can get 20/1 odds. I might even have a dabble on this one myself, either way its going to be a close fight, don’t be surprised if Wilder and Fury are again too close to separate.