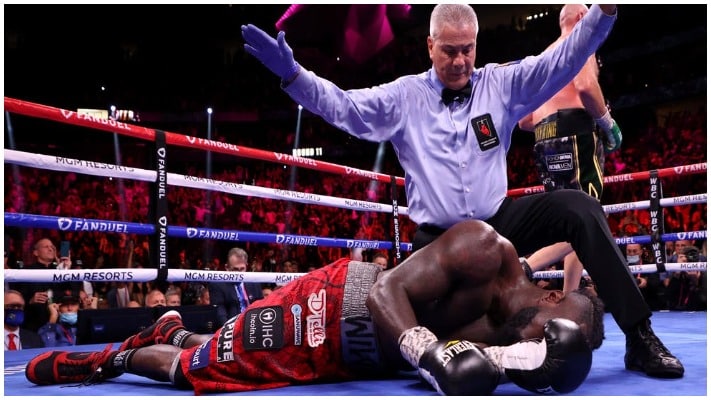 Deontay Wilder has spoken out for the first time since he suffered an 11th round knockout loss to Tyson Fury at the T-Mobile Arena in Las Vegas on Saturday night.

A career-heavy ‘Bronze Bomber’ started well with a flurry of jabs to the body of his opponent in round one of their trilogy bout. The tables quickly turned though and by round three Fury had dropped Wilder and seemed to be on his way to another routine victory.

Wilder rallied in round four, scoring two heavy knockdowns of his own. ‘The Gypsy King’ showed his patented toughness to get off the floor and work his way back into the fight.

By round five the American looked spent. Fury continued to pile on the pressure through the middle rounds and a stoppage win seemed inevitable. Only a true warrior’s heart allowed Wilder to fight on until round 11 before he was brutally knocked unconscious by the British banger.

“I did my best, but it wasn’t good enough,” said Wilder afterwards. “I’m not sure what happened. I know that in training he did certain things, and I also knew that he didn’t come in at 277 to be a ballet dancer. He came to lean on me, try to rough me up and he succeeded.”

Fury attempted to make peace with Wilder after the fight but apparently, the prolific knockout artist dismissed him.

“I’m a sportsman, I went over to (Deontay Wilder to) show some love and respect and he didn’t want to show it back. So I pray for him,” Fury said in the ring post-fight.

Do you think Deontay Wilder will be able to bounce back from his second career defeat?