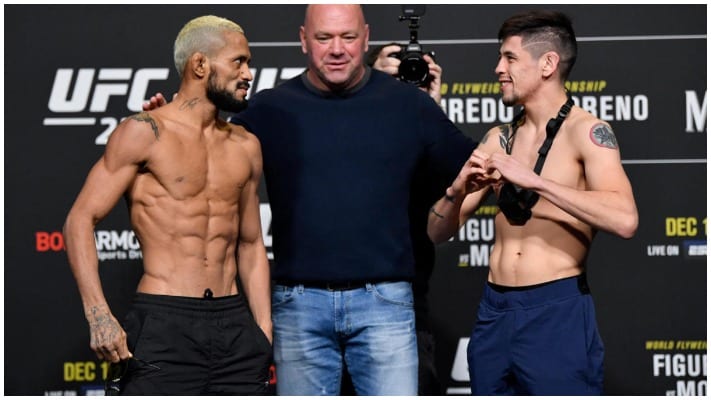 In the UFC 263 co-main event, Deiveson Figueiredo and Brandon Moreno will rematch for the flyweight title. Who’ll take home the 125lb strap? Let’s see what the LowKickMMA staff think.

Jordan Ellis: I’m a big fan of Brandon Moreno and have rooted for him since his days in The Ultimate Fighter. However, tonight I’m backing against him. I feel over five rounds he will push Deiveson Figueiredo close once again but will ultimately fall short on the judges’ cards. Figueiredo is a crisp, accurate puncher. Moreno is as game as they come and always willing to eat a shot. I think this will be his downfall when the 25 minutes are all said and done.

Keelin McNamara:   This is such a genuinely intriguing fight. Their fight match-up was a bona fide Fight of The Year candidate, and the greatest flyweight fight of all time for me. Will this fight be a little cagier now that both fighters have gone 25 minutes against each other? I see two outcomes here: If Moreno can land a couple of takedowns early on, I can see him getting a decision at the end – he is FAST, and he changes levels really, really well. However, he is very heavy on his lead leg, and if “Deus De Guerra” can land some José Aldo-esque leg kicks to that lead leg, I could equally see Figueredo getting a decision or a late stoppage. Do not sleep on this fight.

Maria Morales: This should be fight of the night, period.  The style and speed with which both fight is nothing short of art in motion. Both men are coming into this bout with a point to prove, after they battled to a draw last December.  However, I think Moreno will ink out the win.  I believe that his superior takedown and striking defense will make the difference because I expect the champ to come out aggressive and possibly a bit less crisp.  All of that said, I could completely have this backwards as honestly either one of them could win this war, lol.

Alex Lough: After their FOTY contender last time out, the UFC is hoping that lightning will strike twice with this matchup. Unfortunately, I don’t see that happening. Giving Moreno all due credit, he had the fight of his career last time out, and he still would have come up short if not for a point deduction. On top of that, Figueiredo spent the previous night in the hospital, so it’s highly unlikely that he was firing on all pistons. Will Moreno be able to look as good as he did last time? I don’t know, we’ve only seen him do it that one time. We’ve seen Figueiredo come out and look like an unstoppable beast a number of times. I’m going with the safer bet. Figueiredo by KO.

Ross Markey: This matchup duly delivered in December, with Figueiredo and Moreno turning in a Fight of the Year contender on route to a hugely entertaining majority draw. Kudos to both on the fact those respective performances came off the back of a 21-day turnaround. Figueiredo really had his moments, more often than not back at UFC 256, and against some other contenders, he likely would have managed to get them out of there within the five-round limit. The fact that Moreno survived and managed to force him to his limit for the first time in five fights, is a testament to his grit and heart to continue. The Tijuana native brings that grit that will wear on Figueiredo over time, and his best chance to score his first championship under the UFC’s banner comes later in this rematch. However, I’m picking Figueiredo to take home another eye-catching decision win, in a similarly impressive fight this time around.