LowKickMMA.com
Home UFC News “I ran down like the escalators and everyone was following” – Darren... 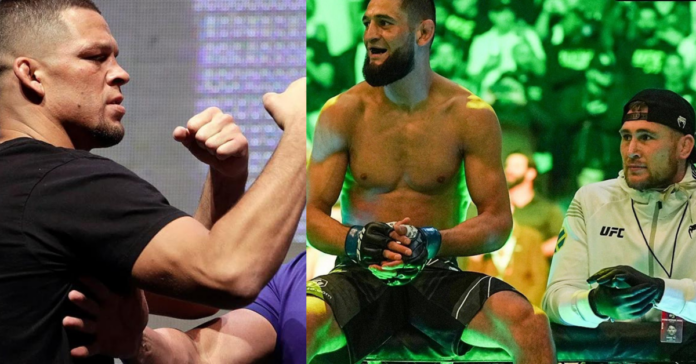 Khamzat Chimaev and Darren Till were getting ready for a team versus team battle at their hotel against Nate Diaz and his crew. In an interview with The Mac Life, the Englishman discussed the altercation at the weigh-ins and a near run-in at their hotel.

While lounging seductively in his hotel bed, ‘The Gorilla’ recounted his version of events. The teams arrive at the UFC 279 press conference while waiting backstage, the teams backing Khamzat and Diaz got into a fight which caused the press conference to be canceled. Afterward, Khamzat, Till, and their team head back to their hotel. Next, someone informed the fighters that Nate Diaz‘s crew has arrived at the hotel. Till explains:

“Someone said that Nate’s team’s outside, so like I ran down like the escalators and everyone was following me. And then there was like full-tilt security and all the UFCs there. I was like, ‘one of yous have just told us that Nate’s team outside…Khamzat’s staying in this hotel. They’re not staying here so if they’ve come here, they’ve come here for one reason.”

Diaz and his team are staying separate from Khamzat, Till, and their team, there is no reason for them to be visiting unless it’s to stir up trouble. It’s a team versus team war, according to Darren Till.

“It’s just team versus team. It’s like they’re going to protect Nate and we’re going to protect Khamzat, and it’s team versus team. That’s all it is.” However, when the team inspect the situation, they realize it was false information and Nate’s team was nowhere to be found. Till continued, “No one’s outside. So that was just like, yeah whatever.”

See the full interview with Darren Till below:

Headlining UFC 279 this weekend, the Russian-born Khamzat Chimaev will put his perfect, unblemished record on the line when he faces the MMA legend Nate Diaz. Diaz made his debut in the UFC in 2007 and this Saturday has been booked as his final fight in the organization. UFC middleweight Darren Till has been in the training camp alongside Chimaev to help him get ready for his fight against Nate Diaz.

This week Khamzat Chimaev and his team have gotten into altercations with UFC middleweight Paulo Costa, UFC welterweight Kevin Holland, and Nate Diaz’s crew. ‘The Gorilla’ Till was asked about the Paulo Costa situation in this interview, but he was not there, and knew nothing.