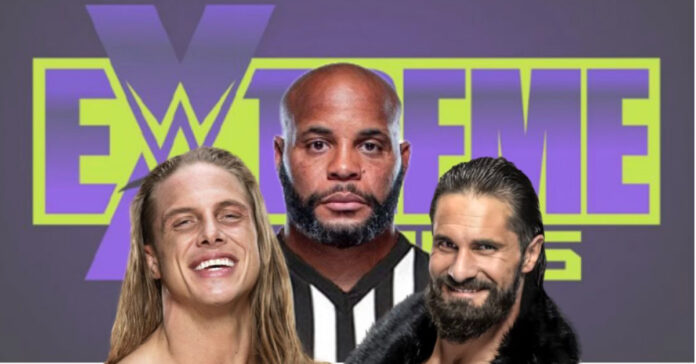 UFC Hall of Famer Daniel Cormier will dip his toe into the world of sports entertainment when he appears at WWE Extreme Rules in October. MMA journalist Ariel Helwani revealed in a post on Twitter that Cormier will make an appearance with the WWE as a special guest referee on October 8th.

The former two-division world champion will appear at the professional wrestling organization’s latest premium event offering, Extreme Rules on October 8th. Emanating from Philadelphia, Cormier will act as the special guest referee for the Fight Pit Match between Matt Riddle and Seth Rollins. Popularized on WWE’s black and gold brand NXT, the Fight Pit is essentially a cage match with a slight variation. The cage does not have any doors and sits on a raised platform. Unlike a traditional cage match that ends via pinfall or escaping the cage, competitors can only win via submission or knockout. Simply put, it is WWE’s version of the UFC Octagon.

Riddle of course is the former UFC fighter who appeared in season seven of The Ultimate Fighter in 2008. Riddle made his official UFC debut that same year earning a victory over Dante Rivera at the TUF season seven finale. During his five-year tenure with the promotion, Riddle would earn a record of 7-3. His final MMA appearance came under the Titan FC banner, scoring a second-round submission over Michael Kuiper in 2014. Shortly after, Riddle began training for his transition into professional wrestling. After a few years on the indie scene, he signed with the WWE in 2018 and has been one of the promotion’s featured performers since.

Daniel Cormier Continues His Foray Into The World of Entertainment

Since retiring from the UFC in 2020, Daniel Cormier has taken on the role of a UFC color commentator. Now the Lafayette, LA native is looking to expand his horizons, recently taking a role in the television series ‘Warrior‘ based on the critically acclaimed 2011 film of the same name starring Joel Edgerton, Tom Hardy, and Nick Nolte. The film centered around two brothers and mixed martial artists who face one another in the finals of an MMA tournament.

In the television series, Daniel Cormier will play one of four fighters the series will focus on. According to Gavin O’Connor who is developing the series, ‘DC’ will play a former fighter reeling from the loss of his wife to cancer. The series will debut exclusively on Paramount+ and will also feature ‘Jane The Virgin’ star Gina Rodriguez.

Whether you love him or hate him, be prepared to see a lot more of Daniel Cormier across multiple platforms in the future as the heavyweight legend is becoming more and more in demand. Are you excited to see what ‘DC’ can do outside of the Octagon?