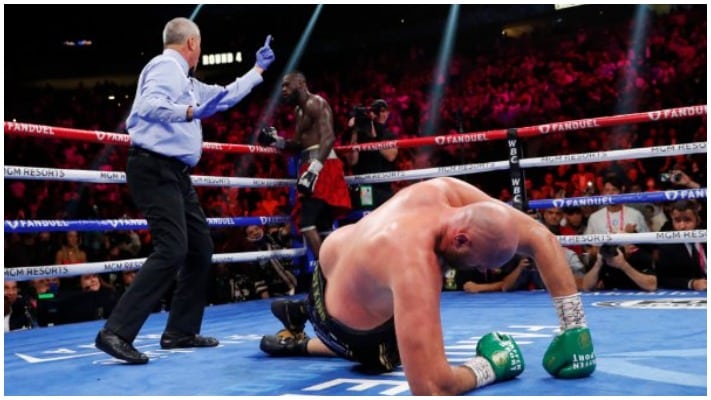 Daniel Cormier voiced his displeasure after seeing what he believed to be Tyson Fury receiving a slow count after being knocked down by Deontay Wilder in their epic trilogy fight at the T-Mobile Arena on Saturday evening.

‘The Bronze Bomber’ was dropped inside three rounds but rallied back in the fourth frame, landing two monstrous punches to secure knockdowns of his own that could’ve ended the fight in the opinion of Cormier if referee Russell Mora wasn’t “crazy slow” with his 10-count.

“I agree with @andreward the count was crazy slow! He isn’t supposed to stop counting to tell deontay to go to his corner. #FuryvsWilderIII,” Cormier wrote on social media.

The former dual-weight UFC champion seems to be lacking when it comes to his knowledge of boxing rules. According to Boxing guidelines, the referee should stop the count if a fighter moves away from his neutral corner.

After scoring his first knockdown, Wilder was told to go to a neutral corner but instead went to his own, something that could’ve and should’ve delayed the count.

On the second knockdown, the referee stopped his count at five to order Wilder to a neutral corner. The process took a couple of seconds before he continued his count at six (as he should), something that upset Cormier and other people supporting Wilder.

Fury got up before the count of eight and went on to dominate the fight. ‘The Gypsy King’ put a beating on Wilder before eventually stopping the former WBC heavyweight champion in the 11th round to earn his second successive win over the American. The pair also fought to a draw in 2018, although many believe Wilder was the beneficiary of wacky scorecards in that fight.

Do you agree with Daniel Cormier? Did Tyson Fury benefit from a “crazy slow” count?