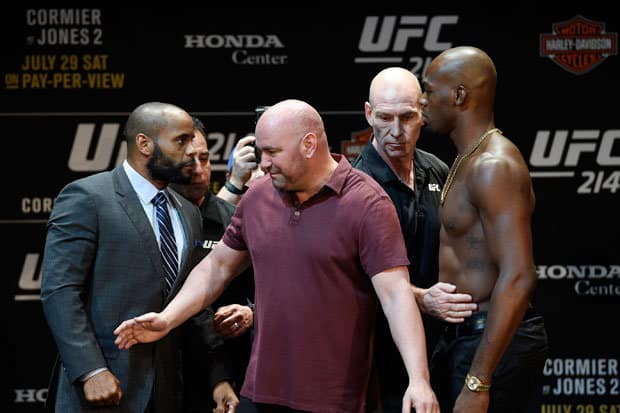 The former has been highly critical of Jones’ sordid history with performance-enhancing drug issues. That’s not much of a after two title fights between the two were affected. But despite the controversy that always follows him, ‘Bones’ is back. The fight to make seems to be Jones vs. Cormier III for the 205-pound title if Jones won’t move up to heavyweight.

“DC” first reacted with a steroid-related tweet about Jones victory:

The heavyweight champion later replied to Dominick Cruz by saying if they did ‘more testing’ and neither failed he would be back at 205 pounds:

Just what ‘more testing’ means for Jones would remain to be seen. He’s already a simultaneous USADA and VADA-tested fighter. It’s still understandable as to why Cormier would want some kind of guarantee from Jones.

As we’ve seen in the rivalry between these two that dates back almost five years, anything can and will happen. “DC’s” supposed to fight Brock Lesnar, yet the trilogy match with Jones is looking better by the moment.

Which fight do you want to see?