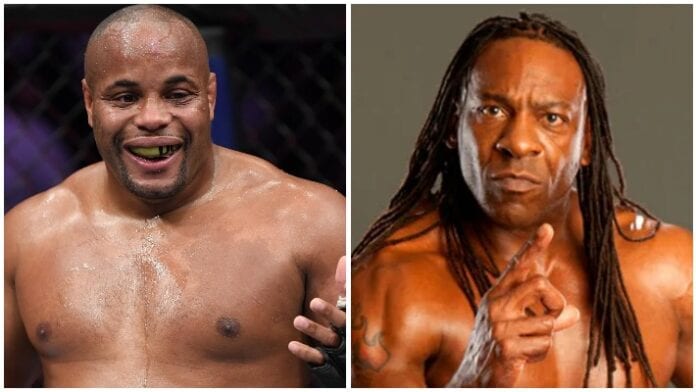 Soon after his final MMA fight at UFC 252 Cormier announced he had started talks about potentially joining the WWE. ‘DC’ said he hopes to first to commentate on the fights before eventually getting involved himself.

Booker T apparently didn’t take too kindly to Cormier trying to engineer his own storylines and has since spoken out against the UFC great. In a recent episode of his ESPN show Cormier and his co-host Ariel Helwani fired back at the veteran wrestler – check out the clip below.

Booker T has now fired back with a Cormier call out which seems to cover anything but MMA.

“I challenge Daniel Cormier since he’s talking now to get in the gym and work out with me, and he couldn’t hang 2 seconds,” Booker T said. “He couldn’t match me in the pound for pound in any form of the gym other than probably MMA.”

“Daniel Cormier, I challenge you to a shirtless contest to show the world who’s who and who’s the real man as far as that goes. As far as it’s over? It’s not over until I say it’s over. Step inside the Hall of Fame and let somebody ask you real questions, not somebody that’s going to be perhaps in Vince McMahon’s kiss my a** club.”

Booker T accepts the former dual-weight UFC champion who competed in wrestling at the Olympics has the credentials to commentate on the WWE  but advised ‘DC’ to “learn the protocol” before mouthing off again, he said.

“You have to know how to make it in the locker room before you ever have a chance of making it in the ring. All the accolades that he brings in from the fighting game are definitely worthy of him being in the commentary booth and talking over what we do. If you’re going to come in, perhaps learn the protocol first and foremost.” (Transcribed by Essentially Sports)

Do you want to see Daniel Cormier cross over into the WWE?