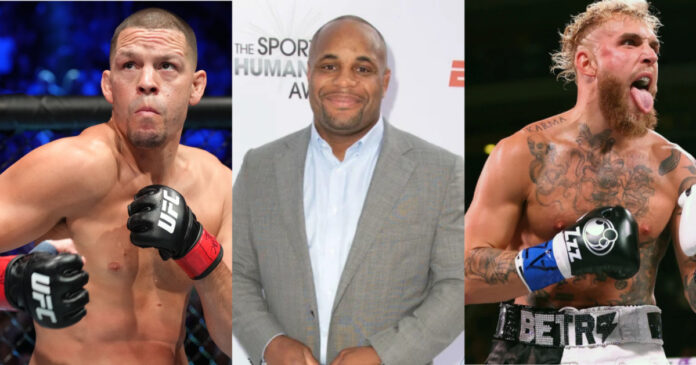 Former UFC champion Daniel Cormier says that Nate Diaz’s willingness to fight anyone could make he and Jake Paul a lot of money.

Following his win over Anderson Silva this past weekend, Paul would set his sights on another UFC legend in Nate Diaz. During the event, there had been an altercation between team Diaz and team Paul’s respective teams with Diaz himself allegedly slapping one of Paul’s entourage.

Paul would sound off on Diaz, calling him a b***h before challenging him to fight.

On his RC&DC podcast, Cormier would credit Diaz for his unwavering lack of fear, saying that the Stockton Native will not back down from anyone.

“That’s one thing I can tell you about Nate Diaz and I respect that about him is that if there are words spoke, he ain’t gonna run away“, Cormier said.

“He came up to me in the Apex when I was with my son. Now, he was smiling, I don’t know if that’s because the kids were there, If it was just me and some other adults maybe it would have been different.”

“He didn’t shy away from coming up to me to speak to me as most other fighters do.”

Cormier could also state that a bout between Diaz and Paul and bringing two such relevant stars together could mean a serious payday for both men.

“He [Diaz] isn’t afraid of Jake Paul and that will make for a lot of money between these two cause the kid,” Cormier said. “Paul, for all that you think, he’s a fantastic young promoter.”

“He does a great job of building an event, people seem to want to tune in to what Jake Paul is doing, as they do with Nate Diaz. If they are to fight, I would tap in again, I’m constantly buying Jake Paul event right now because there’s a lot that surrounds it.”

Do you agree with Daniel Cormier?