LowKickMMA.com
Home UFC News Dana White ‘Working On Something’ For Leon Edwards That’s Not A Kamaru... 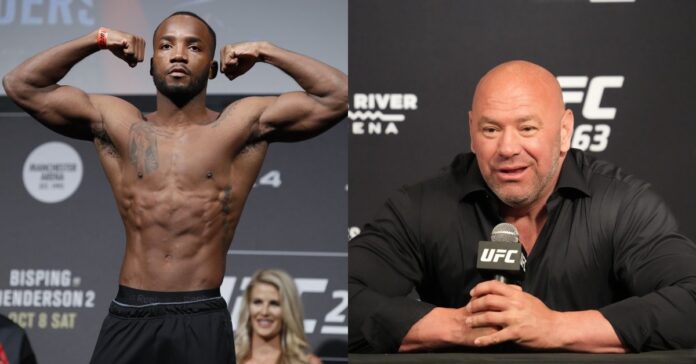 Dana White has confirmed that the UFC is “working on something” for welterweight contender Leon Edwards, but that the process does NOT include current welterweight champion Kamaru Usman.

Edwards (19-3) was supposed to be facing off against Jorge “Gamebred” Masvidal at next week’s stacked UFC 269 PPV event. However, Masvidal suffered a rib injury in training and the fight is now scrapped. Edwards then verbally unloaded on Masvidal, claiming that he was “dodging him”, before aiming his crosshairs on Usman, tweeting that he will “see him soon.”

Despite feeling justified that a current ten-fight unbeaten streak is enough to warrant a crack at ‘The Nigerian Nightmare”’ White has other plans for Edwards.

During a recent appearance on the Jim Rome Podcast, White confirmed that Usman was not in the near future thinking of White for “Rocky” Edwards.

Usman (20-1 MMA) most recently a month ago, headlining UFC 268, where he defeated Colby Covington for the second time in a thrilling five-round affair.

According to Dana White, Usman is presently sidelined due to a hand injury and thus a rematch with Edwards is currently out of the equation.

Usman and Edwards originally collided in December of 2015, with Kamaru emerging victorious by way of a unanimous decision. Since then, ‘Rocky’ has gone 9-0 with 1 no-contest in an unfortunate bout with Belal Muhammed. During his impressive run, Edwards has scored victories over Nate Diaz, Donald Cerrone, Gunnar Nelson, and former lightweight champion Rafael Dos Anjos.

Who do you think Dana White will book Leon Edwards against?