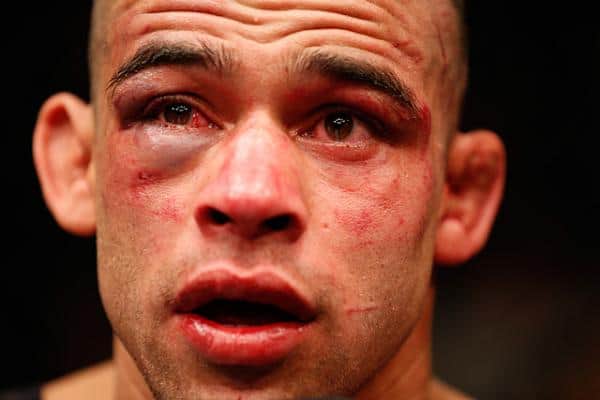 After being touted – rightly or wrongly – as the world’s No. 1-ranked pound-for-pound fighter heading into his UFC 173 title defense against T.J. Dillashaw, former UFC bantamweight champion Renan Barao has experienced a shockingly quick fall from grace after suffering his second straight knockout loss to ‘The Viper’ in the main event of last Saturday’s (July 25, 2015) UFC on FOX 16 (watch highlights here) from the United Center in Chicago, Illinois.

The deflating loss left many pining if Barao should have made his way up to the featherweight division a long time ago, as his well-documented massive weight cuts have obviously begun to take a toll on his body. Although Barao made weight in Chicago, he reportedly lost about 15 pounds of mass heading into the bout, which definitely could have played a big part in his perceived loss of any strength and power advantage.

And even still, the draining cut could have sapped his energy as well, as it appeared ‘The Baron’ quickly faded even in the early stages of his rematch with Dillashaw. Speaking at the event’s post-fight presser (transcribed by Bloody Elbow), UFC president Dana White was among those who noticed that, and believe that Barao should finally start fighting at 145 pounds:

“Yeah, it’s obviously his decision but I think it would be a good idea to go up in weight,” White explained at the post fight press conference. “You know, he’s been having problems with the weight. He didn’t have problems yesterday — he made the weight easy — but he looks really drawn out and dry when he cuts weight. So he should probably move up.”

Under some intense criticism of his own that he predictably doesn’t seem to care about one bit, White focused on past instances of where we’ve seen formerly dominant fighters lose an especially one-sided bout and never return to that once-great level. He believes this may be the case with Barao:

“I don’t know, it’s weird because there are situations where, when a guy loses a certain fight in a certain way, he’s never the same,” he said. “It happened to Meldrick Taylor and a million other guys in boxing. And it almost looks like it happened to Renan.”

All other issues aside, the polarizing White has a great point in detailing something we’ve undoubtedly seen countless times before. A move up to featherweight could be coming for Barao in the near future, but it’s a sticky situation in that his good friend and teammate Jose Aldo is still the champion of that division.

With Aldo currently headed for his long-awaited grudge match with newly crowned interim champion Conor McGregor, a move up to lightweight could also be in the works for ‘Junior,’ which could potentially open the door for Barao to succeed at 145 pounds.

Will a lessened weight cut work for the once-revered former champ, or have his losses to Dillashaw simply taken too much out of him mentally?