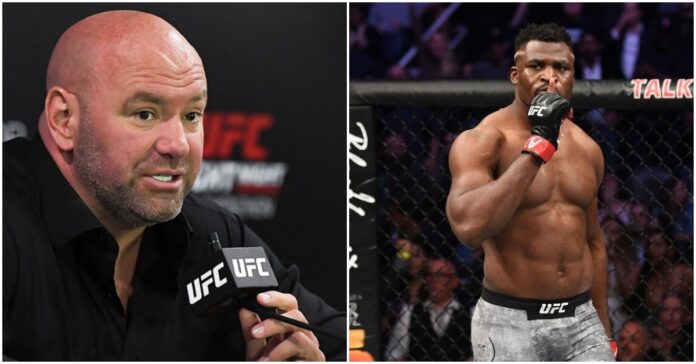 Dana White has shared his opinion on a potential future boxing match-up between Francis Ngannou and Tyson Fury.

It seems he doesn’t rate Ngannou’s chances against one of boxings’ best.

Rumours have circulated regarding the two men facing each other for quite some time, this has only been pushed on more by the pair who are both open to the idea as well as openly campaigning for it.

The two men are open to a specialised rules set using four-ounce gloves for their matchup, with it only seeming more likely given Fury’s announcement that he would be retiring from boxing following the Dillian Whyte matchup on The MMA Hour.

Ngannou has some obstacles in his way before he can begin to consider a matchup such as this. The current heavyweight champion will be side-lined through the remainder of 2022 due to needing reconstructive surgery. Not to mention he will still need to overcome the hurdle that is his UFC contract. Ngannou fought out his contract following his victory over Cyril Gane at UFC 270 but is still tied to the UFC due to the companies ‘championship clause’.

If Francis was ever to be in the position however, UFC President Dana White still doesn’t think it would end well for him.

Despite Ngannou possessing immense power which has stopped 12 of his 17 opponents, Dana White drew comparisons with Fury’s former opponent Deontay Wilder, a man who also possesses that one shot knockout power, who couldn’t best Fury on three attempts.

“So did Deontay Wilder – he had that one-punch (knockout) power, too,” (transcribed by mmajunkie.com)

How do you think Francis Ngannou would fair if he were to compete in boxing?