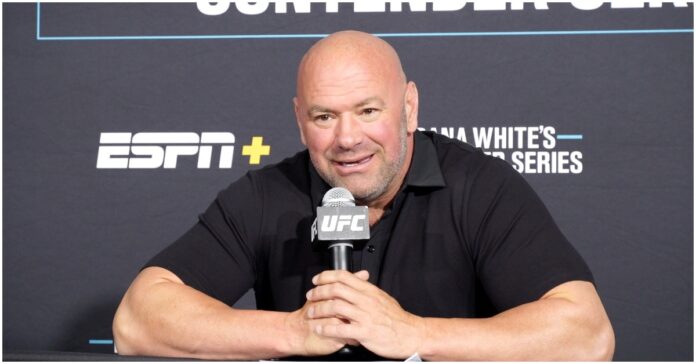 The president of the Ultimate Fighting Championship, Dana White, has revealed who could be next to run the promotion.

Despite being just 52 years old there have always been people wondering who would replace White as the head honcho of the UFC when the time comes. Daniel Cormier has always been linked to the possibility of being one of the candidates to fill in White’s shoes, but in a recent interview with Barstool’s Robbie Fox, the president of the UFC made it clear that ‘DC’ wasn’t fit for the role.

White did have an answer to the hypothetical question about who could take over if he had to step away on a day’s notice.

“It’s funny because I see people say that all the time and they think it’s this guy or that guy,” White continued. “But, it’s people that really don’t know anything about this business. And there’s so much more. What we do, there’s a formula to what we do and why we’ve been successful.

“And there is a guy, there’s one guy that [can replace me]” White added. “And there’s certain things that I do that he wouldn’t be able to do, but the important things that get done over there is what really matters. And this guy could absolutely, positively, do it.”

Those wanting to see the current president step down should be assured that the boss isn’t going anywhere anytime soon. With the current financial state of the company and the renewed growth and record breaking numbers all while being the fastest growing sport in the world, the leadership of Uncle Dana will be much needed.

The UFC had a very successful event in London this past weekend, making the international fans wonder when they can get another taste of a live event. Dana White said during the post-fight press conference that he plans on putting on shows in more countries as COVID-19 restrictions continue to ease.

There have been rumors of the promotion having another show in England later this year and Singapore is the front runner to host UFC 275, but it was France that Dana confirmed that will happen in 2022.

“I can tell you this, we will definitely do France this year,” White said.

The UFC has never held an event within France, despite having numerous events throughout Europe in its existence, but with the nation producing stars like Francis Ngannou and Cyril Gane, it seems that there would be no better time than 2022 to get started.

Who do you think would be a good president for the UFC? Which country would you like the UFC to come to next?