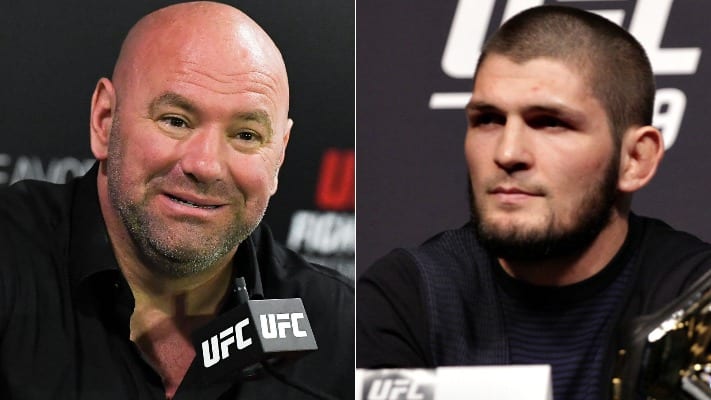 Dana White has revealed he spoke with lightweight champion Khabib Nurmagomedov in the immediate aftermath of Dustin Poirier’s emphatic, upset win over Conor McGregor in the UFC 257 main event.

Poirier wrestled the Irishman early before going to calf kicks. By round two McGregor’s leg was busted up making him an easy target in the boxing range. ‘The Diamond’ unleashed a flurry of strikes that badly rocked McGregor. ‘Notorious’ fell to the floor and Poirier swarmed for the stoppage win. He becomes the first man to KO/TKO McGregor in MMA.

Prior to the fight White revealed Nurmagomedov was looking for one of the four lightweight contenders competing at UFC 257 to impress him and force his comeback from retirement.

Speaking at the UFC 257 post-fight press conference White revealed he had spoken with Nurmagomedov and was no longer confident he could convince the undefeated fighter to return.

“I did talk to Khabib,” White said. “He said to me, ‘Dana be honest with yourself. I’m so many levels above these guys. I beat these guys.’ I don’t know. I don’t know what he’s (thinking) but it doesn’t sound very positive so we’ll see. And what he said was, ‘I told you guys before he won’t hold the division up.’ I mean, he already retired. He is basically retired. I’m the one who has been trying to get him to do one more.”

White won’t put pressure on Nurmagomedov by enforcing a timeline on the Russian’s decision and claims it doesn’t really matter when the lightweight champion makes up his mind as none of the top contenders will be fighting anytime soon.

Do you think Dana White can convince UFC lightweight champ Khabib Nurmagomedov to fight on?