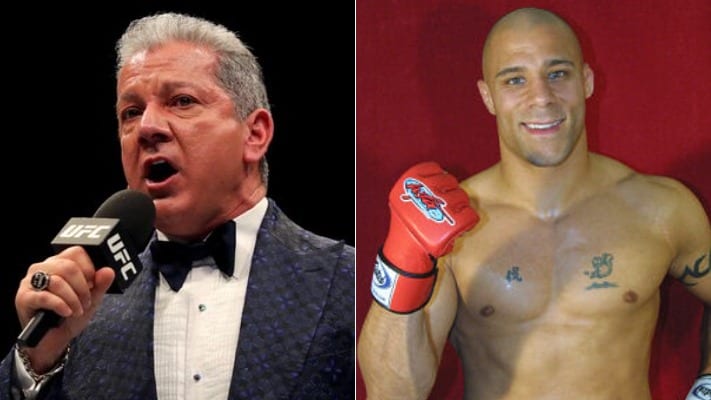 Bruce Buffer is a UFC legend in his own right, the way he introduces fighters hypes up the viewers and the fighters themselves. Buffer is well respected among the MMA community, however that didn’t stop him from getting into a scrap with UFC Hall of Famer Frank Trigg.

As part of the UFC original fightpass show Fightlore, both UFC president Dana White and Buffer give their stories of the fight and what happened that night. You can find a short preview of the show below.

“We had an Ultimate Fighter TV show and we were staying at the Hard Rock hotel and we had just got done doing the show,” Buffer explained. “I went up to [ex-commentator] Mike Goldberg’s room and Frank was in there and we are friends! We decided we were going to go out, have a little dinner and go to a club, when we get to the elevator, the doors open and there is Dana White and his security guard and then Frank walks in,” Buffer said. “I love watches and Dana had this really cool watchband on and I go, ‘Dana, what a cool watch.’ all of a sudden, I got a wrist hand shot to my neck. I turned around and I said, ‘Frank you hit me, why the f*** did you hit me?’”

Buffer then goes on to say “He said the wrong thing to me. He said ‘Well what are you going to do about it?’ I just reacted and went ‘pop, pop’ – I punched him twice. Frank came back at me, hit me harder and I had to hit him back harder. It was on! 10 floors; what does that take – 15, 20, 25 seconds? All 10 floors, we just kept going and going until the point that he threw a knee up and kneed one of my friends!” Buffer stated. “Dana was against the elevator, I don’t remember seeing him. I was too busy focusing on what was going on and the adrenaline was pumping and that was when the doors started to open. I just threw my arms in the air and I said, ‘Frank, we’re done!’ I looked down and there was blood up and down my shirt and my thumb is peeled back and you can see the bone in my thumb.”

White then proceeds to explain what he witnessed that night in Vegas. “Frank Trigg, at the time, was a ranked UFC fighter! He just karate chopped him in the throat, and Trigg said, ‘don’t f****** talk while I’m talking.’ I was like, ‘oh s***’.” White then adds “Buffer blasted him and it was on. They started throwing punches at each other and I was like ‘holy s***!’ “I stepped back into the corner of the elevator and I just f****** watched and let it go. They stopped fighting as soon as the elevator doors open at the lobby! Buffer’s hand was sliced open from Frank Trigg’s watch. Those two shook hands, apologised to each other and Buffer went to the hospital to go get stitches.” (Transcribed by talkSPORT)

Bruce Buffer is also an accomplished martial artist with a black belt in Tang Soo Do as well as a green belt in Judo. Buffer is loved by all MMA fans and the MMA community was pleased to hear that Buffer will not retire for at least 10 more years.