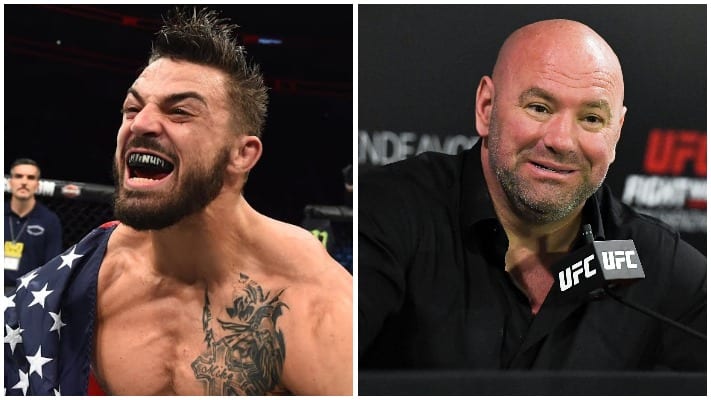 It looks like Darren Till won’t be the only one missing out on being in Mike Perry’s corner.

The always exuberant Perry – who has become a fan favourite for his antics both inside and outside of the cage – recently announced that he would be auctioning off a cornerman spot for his fight against former welterweight champion Robbie Lawler at UFC 255. This comes after his girlfriend, Latory Gonzalez, served as his sole cornerman in his victory over Mickey Gall.

The offer drew interest from a number of bidders, from MMA fans to adult film actresses. UFC middleweight contender Darren Till even offered a $5,000 bid, though Perry himself eventually shot that down.

Now it appears that the spot will remain empty, as UFC President Dana White scoffed at the idea during his media scrum.

“Yeah, no, you can’t do that,” White said when asked if the winner of Perry’s auction would need clearance from the athletic commission. “You can’t do that.”

It remains unclear why White shut the idea down. The UFC has already allowed Gonzalez to act as a cornerman without any formal background, as well as Diego Sanchez’s head coach Joshua Fabia.

UFC 255 takes place on November 21. It is set to be headlined by a pair of flyweight championship bouts, as Deiveson Figueiredo takes on Alex Perez, and Valentina Shevchenko battles Jennifer Maia.

Should Mike Perry be allowed to auction off his cornerman spot? Let us know!