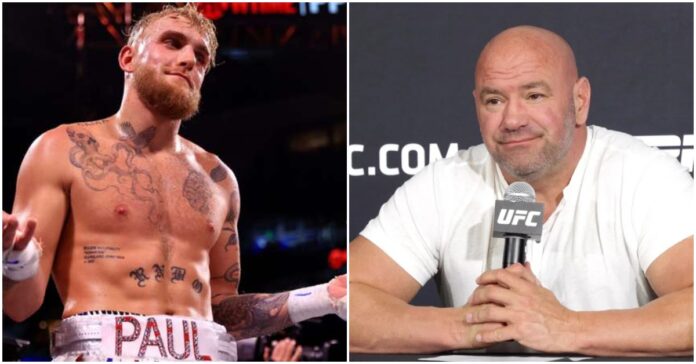 Dana White downplays his ongoing rivalry with boxer/YouTuber Jake Paul and actually commends him on making money in the combat sports world.

Paul has made the transition from a content creator to a boxer in a short amount of time. He hasn’t yet fought a true boxer, but has beat to former MMA champions in Tyron Woodley and Ben Askren. In his last fight, he was able to knockout Woodley in a way that he has never been knocked unconscious in his life. He has turned most of his competitors into memes by the time the match is up.

Paul made over $40 million in 2021 by boxing. That is a ton of money for a fighter that only has 5 professional fights. While his last PPV numbers were a bit down, one would assume that if Tommy Fury wouldn’t have dropped out of the fight, that Paul would have sold a lot more. A lot of people are really looking forward to Paul fighting a true boxer and the fight with Fury is a fun grudge match.

Paul also has taken multiple shots at UFC president Dana White since entering the world of combat sports. Paul has taken shot after shot at White for not taking care of his fighters and whether his intentions are true or not, he has been a loud voice for higher fighter pay in the UFC. He even challenged White to a competition between the two. Paul and White both accused each other of some wild things. Paul accused White of being addicted to cocaine and hookers, while White accused Paul of being on steroids.

Dana White on the other hand, doesn’t hate Jake Paul like many believe

“He really hasn’t been a thorn in my side. I don’t hate the guy like people think I hate him,” White told Manouk Akopyan. “You know, he’s out there doing his thing. He’s a young guy who’s got a fanbase and is trying to make some money. I don’t ever fault anybody for that.” (Transcribed by MMA News)

Paul also had a list of goals for 2022 that included “exposing bully Dana/help fighters”. Paul had also been rumored to fight Mike Tyson the past couple of days, but that report was a surprise to everyone, even Tyson himself.