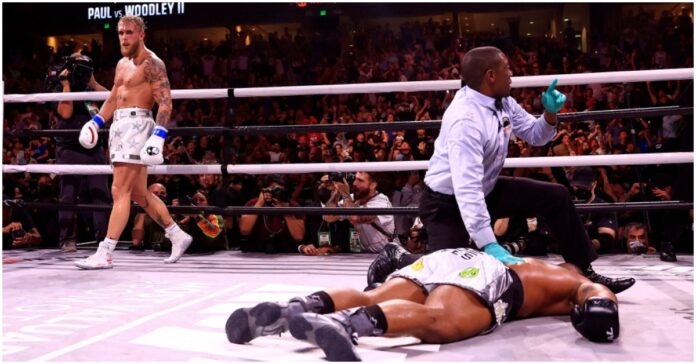 Ahead of the fight, the YouTuber insisted “I’m f*cking him up” and that is exactly what he did on Saturday night when he landed a devasting right hand that sent Woodley falling face-first to the canvas in the sixth round.

On the live broadcast, the shot looked pretty brutal, but footage taken from ringside has now appeared online and shows the true extent of Paul’s devastating knockout blow – check it out.

What’s Next For Jake Paul?

After picking up the biggest win of his career the opportunities really are endless for the former Disney actor turned pay-per-view boxing star. Paul made his intentions clear during the post-fight press conference when he requested UFC president Dana White allows him to fight some of his biggest stars.

It seems unlikely that White will allow any of those fighters to take a bout with Paul while they are under contract. Diaz has just one fight left on his current deal and doesn’t seem interested in re-signing the MMA’s premier promotion. So, he could genuinely be an option for Paul who could also rebook a fight with Tommy Fury.