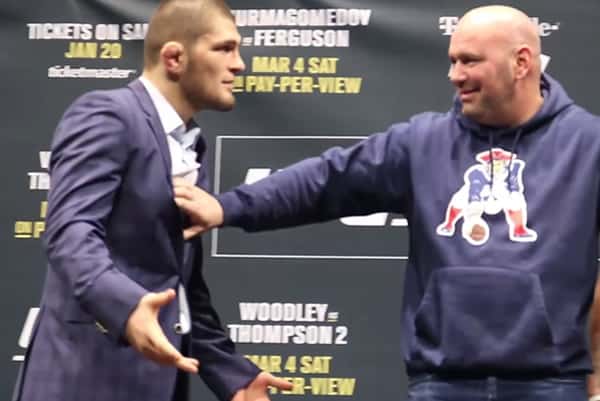 Punishments were issued last week to all involved in the post-UFC 229 .

The Nevada State Athletic Commission (NSAC) issued out suspensions and fines to Conor McGregor, Khabib Nurmagomedov, and Khabib’s teammates, Abubakar Nurmagomedov and Zubaira Tukhugov for their involvements. While UFC President Dana White believes the NSAC was a little too harsh on his lightweight champion, he fully agrees with the sanctions handed out to Abubakar and Tukhugov (via MMA News):

“We’re working on that right now with him,” White said. “The one thing I absolutely agree with the athletic commission on that one.

“Bad enough the fighters are in there fighting, you cannot have the corner men jumping in and fighting and all the things that went on leading up to that fight with the corner and their teammates. That can never happen.”

Abubakar Nurmagomedov and Zubaira Tukhugov were each given one-year suspensions and $25,000 in fines. Khabib was given a whopping $500,000 fine along with a nine-month suspension for sparking the entire ordeal. As for McGregor, he will pay $50,000 and serve a six-month suspension.

Khabib has said he will sit out along with his teammates as they serve their suspensions. If that’s the case, the 155-pound champ will miss most of 2019. It’s unknown who “The Eagle” will fight upon his return, but Tony Ferguson seems like the most deserving candidate of the bunch.

As for McGregor, a fight with Donald Cerrone is really picking up steam as of late.

Dana White on Conor McGregor vs. Cowboy Cerrone from The Jim Rome Show on Vimeo.