LowKickMMA.com
Home MMA News Dan Lambert Would Fight Glenn Robinson With One Hand Tied Behind His... 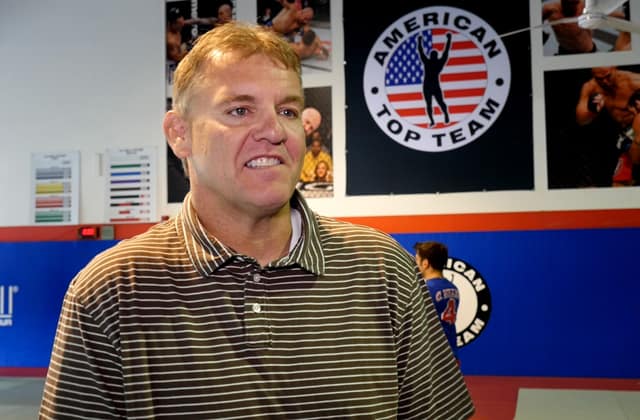 Much of the focus of the show, which has each episode’s bout take place at the home gym of the previous week’s winning team and involves $500,000 in cash prizes for the winning team, largely centers on the legitimate beef between ATT head man Dan Lambert and Blackzilians manager Glenn Robinson.

The two opposing leaders spend a substantial amount of the show’s airtime blasting one another, and it’s been the cause for a new kind of MMA TV, if nothing else. When Robinson’s Blackzilians surged out to a 4-0 lead on the points-based show, obviously Lambert and his team were rightfully worried about ATT’s plight.

But team member Hayder Hassan scored a much-needed knockout of touted Blackzilians karate stylist Andrews Nakahara in the first fight of the second round last week, putting ATT only one fight away from tying up the series. That has Lambert’s dislike of Robinson at an all-time high, and the famed coach discussed his disdain for Robinson in a spot with Submission Radio.

Much of the reason Lambert dislikes Robinson so much is that, as a non-athlete, he’s supposedly trying to be something he’s not. Because of that stance, Lambert said he would fight Robinson with a rather peculiar set of stipulations:

“I would gladly tie one hand behind my back and agree to only use open hand slaps. And I think if you see Glenn – you know, I’m not going to claim to be the most athletic or strongest or fastest or best guy in the world, but you know Glenn’s just a…he’s just a glow worm. I mean look at the guy. It’s part of what gets to me, is he’s trying to portray himself as being something that he’s not, and it just really bothers me.”

Overall Lambert was surprised by Robinson’s ‘tough guy’ stance on the show, because he was apparently invited to lunch with the Blackzilians leader to see how nice of a guy he actually was. But apparently something was lost in translation, as it came out that Robinson actually challenged him to a fight, which Lambert of course denied:

“Glenn’s lawyer asked me to have lunch with him and Glenn at a restaurant because Glenn’s a really nice guy, and if I sat down and had lunch with him I would see what a real nice and humble guy he was and I might want to do business with him. And I told his lawyer that that’s just never gonna happen.

“So I guess that somehow translated in his mind that he challenged me to a fight or whatever. I was actually surprised that he played the tough guy in that. I thought he was just going to try to come across as a real nice and humble dude who cared a lot for his fighters. I was pretty surprised that he tried to play the tough guy, which is why I said, “If you’re being that aggressive, you know lets go in your office and talk about it.”

The gloves are off heading into tomorrow night’s (Wed., May 27, 2015) episode, and while it’s apparent that middle-aged men like Lambert and Robinson won’t actually end up fighting, there’s not much doubt that it has translated into entertaining television (more entertaining than some of the actual fights). Will ATT be able to complete a momentous comeback?