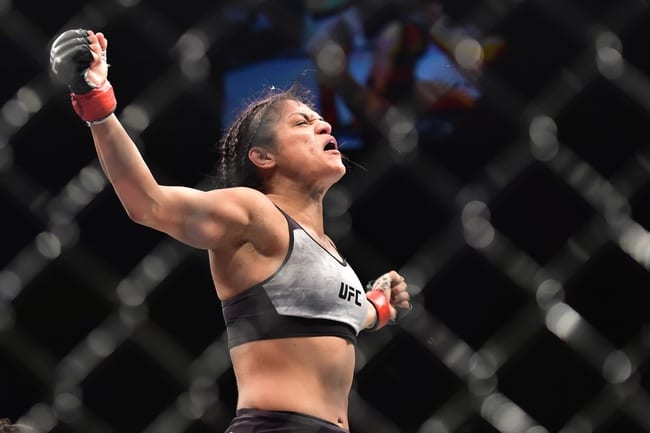 Top ranking UFC Women’s Flyweight Cynthia Calvillo has been pulled from her scheduled bout against Lauren Murphy at UFC 254.

ESPN’s Brett Okamoto shared the news on Twitter stating that sources had informed him the UFC would be looking for a replacement to keep Murphy still on the card.

UPDATE: Calvillo will be replaced by UFC debut fighter Liliya Shakirova who will now face Lauren Murphy at UFC 254.

In an article for ESPN Okamoto went further explaining that the withdrawal comes after a positive COVID-19 test on Thursday.

Calvillo was set to make her second appearance at Flyweight after moving up from Strawweight to take on Jessica Eye in June. In this matchup, Calvillo shut out Eye earning a dominant Unanimous Decision victory. This win would extend her winning streak to three with her only loss coming against Carla Esparza in 2017.

Lauren Murphy was also coming into this fight on a winning streak of three, most recently defeated Roxanne Modafferi by unanimous decision in June. Coming in at number 6 a win against Calvillo would look to move Murphy into the top five of the division.

Currently, the UFC has not shared any news about who will replace Calvillo to keep this fight on UFC 254 to be headlined by Khabib Nurmagomedov and Justin Gaethje. This is not the first fighter to fall out of the PPV, last week Rafael Dos Anjos was forced to pull out due to a positive COVID test leaving Islam Makhachev without an opponent. The UFC remains hopeful they will be able to find him an opponent also so he may remain on the card with his teammate, the champions Khabib Nurmagomedov.

Outside the main event, UFC 254’s co-main event will showcase a matchup of two top-ranking Middleweight contenders when the former champion Robert Whittaker takes on the rising Jared Cannonier. The main card also showcases a key matchup in the heavyweight division between Alexander Volkov and Walt Harris, and a fight that has been rebooked many times between Magomed Akalaev and Ion Cutelaba.