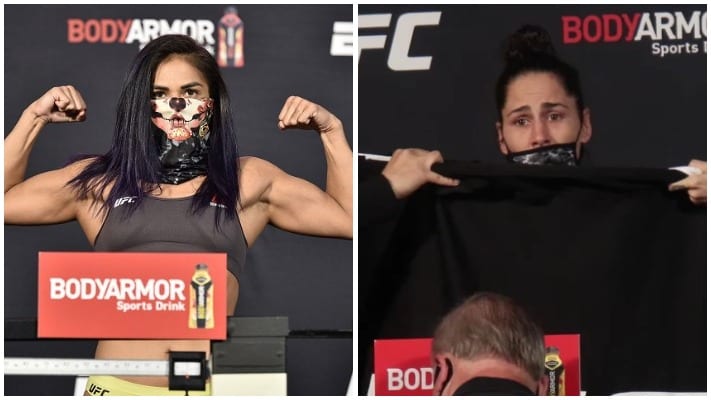 Cynthia Calvillo has accused her UFC Vegas 2 opponent Jessica Eye of attempting to cheat to make weight prior to their main event match-up. The bout was Calvillo’s first at flyweight after she had trouble making the strawweight limit for years.

At her new home, she made the limit comfortably. The same can’t be said for her opponent Eye. ‘Evil’ who failed to make weight for her last fight came in 0.25lb over her contracted weight. The former title challenger looked fragile on the scale and opted to not try to cut the quarter pound and instead sacrificed a portion of her fight purse. After picking up a unanimous decision win against Eye in her flyweight debut Calvillo has claimed her opponent cheated while trying to make weight according to Aaron Bronsteter who wrote on social media.

“Cynthia Calvillo says that she received a text message from Jessica Eye’s coach that she was going to miss weight by three pounds, but claims that Eye held the towel during weigh-ins and that’s why she only registered as being 0.25 lbs over.”

This narrative was one painted by fellow flyweight contender Joanne Calderwood immediately after weigh-ins on Friday. The Scot who is due to take on Valentina Shevchenko later this year said she had heard Eye was several pounds overweight and accused her of using the towel trick to cheat, she wrote.

“Was it really .25 because I’ve heard from multiple people that you were 4lbs over 15 mins before you actually weighed in. Main event spot or not if you know your not gonna make it don’t take the fight. #banthetoweltrick.”

The towel trick was made famous by Daniel Cormier when he fought Anthony Johnson at UFC 210. By grabbing onto the towel, a fighter can make their weight on the scale appear lighter than it actually is. On this occasion Eye still failed to make weight even if she did attempt the towel trick.

Do you believe Cynthia Cavillo? Did Jessica Eye attempt to cheat to make weight?