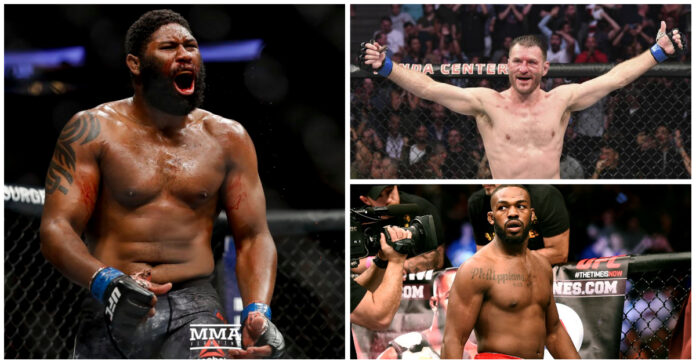 Former UFC light heavyweight champion Jon Jones has been on the sidelines since his last outing against Dominick Reyes in Feb. 2020. After initial plans to pit him against Ngannou fell through, Jones was linked to a bout with the greatest UFC heavyweight champion Stipe Miocic for his divisional debut.

While many have backed Jones to run through Miocic, a few people have spoken in favor of the 39-year-old Ohio native who’s also allegedly bulked up to 250 lbs as opposed to his traditional 225lb stature.

In an appearance on The Fighter vs. The Writer, UFC heavyweight Curtis Blaydes shared his thoughts on the potential showdown between “Bones” and Miocic.

Blaydes broke down how the fight will likely go based on what we’ve seen from both fighters so far.

“Jon, he hasn’t shown that one-punch knockout power,” Blaydes explained. “What he has shown, he is extremely creative. He’ll hit you with elbows, knees, teeps, all types of different stuff. Even on the ground, he’s aggressive.

“He’s looking for submissions. He’s looking to drop elbows. He brings a lot to the table, but the biggest thing he doesn’t have is the power. I think that’s always the equalizer.”

“Razor” Blaydes backed Miocic to win the contest given what he’s seen from the former champion.

“I know that wasn’t one punch, but it was one punch that set up the finish. He’s already shown that, and he has the wrestling, he has the conditioning. I just believe he’s a smart enough fighter, he’ll be able to figure out Jon after two or three rounds.

“He’ll start to land. His punches are going to hurt more than the punches of a Jon Jones. That’s just what I think. I think it could go either way.”

While he did extend his support for Miocic, Blaydes stated that he wouldn’t be surprised if Jones won either.

“What if Jon Jones comes out and takes down Stipe and he’s on top?” Blaydes said. “We haven’t seen Stipe on bottom. I guess we have against [Daniel Cormier], but the dimensions of ‘DC’ vs. Jon Jones are different. He’s a different guy. I think it’s going to be interesting. I would pick Stipe, but I wouldn’t be shocked if he lost either.” (h/t MMA Fighting).